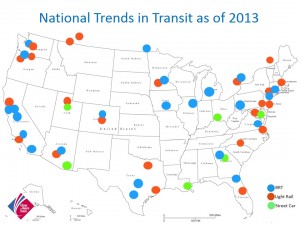 As we wrap up 2013, where do we stand with transit in St. Louis? While there was no groundbreaking or construction in 2013, transit is on the move nationally and in the St. Louis region.   Nationally, more than 50 transit projects were planned or under construction including Bus Rapid Transit (BRT), light rail and streetcars totaling billions in investment in public transit infrastructure. (http://www.thetransportpolitic.com/).  This is even more impressive in light of the fact that the Congressional Budget office estimates that the Highway Trust Fund will be bankrupt by the end of 2014 unless a new funding mechanism is identified. Cities and states are stepping up with creative financing alternatives, public/private partnerships and other funding mechanisms to ensure transit moves forward.

Our neighbors in Kansas City, MO have a streetcar project under construction with an expected opening in 2015 with the help of a Transportation Development District and a TIGER grant.  So where are we in St. Louis?

No dirt was moved in 2013 to begin a transit project, but the region did make progress toward expanded transit through the study for a possible new MetroLink station in Midtown near the new CORTEX development, the Streetcar project in downtown St. Louis, the Loop Trolley Project and two Bus Rapid Transit projects for the region.

For the first time, CMT took a more  proactive role in moving transit forward by leading the Feasibility Study for a possible new MetroLink Station in the midtown area serving the CORTEX development and surrounding neighborhoods. This sixth month study will wrap up in January 2014 offering estimated capital and operating costs which will determine the feasibility of adding a station to the current MetroLink alignment and its impacts on ridership, development and the surrounding communities. This would be the first addition to the light rail system since the opening of the Cross County alignment in 2006.

The Partnership for Downtown St. Louis wrapped up the Feasibility Study for the St. Louis Streetcar project in the Spring of 2013.  The 6-month study was sponsored by the Partnership for Downtown St. Louis and conducted by URS Corporation to assess the potential for a modern streetcar line connecting Downtown St. Louis, Midtown, the Central West End, and the Near Northside.  The East-West Gateway Board of Directors added this project to the list of ‘illustrative’ projects for the region – projects that are transit priorities but have no funding source available at this time.  This project joins the ranks of projects such as the Northside/Southside MetroLink extension; the Daniel Boone Corridor extension; and several Bus Rapid Transit corridors.   The St. Louis Streetcar Company was formed to move the project forward and raise the matching funds needed to secure federal funding and move the project to the next level – the Draft Environmental Impact Study. 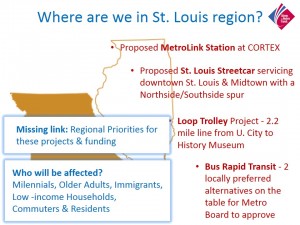 While faced with some hurdles in 2013 including several lawsuits, the Loop Trolley project continues to stay on track.  Just two weeks ago, the Federal Transit Administration conditionally approved the project.  In addition, the Loop Transportation Development District (TDD) has secured 2 historic Portland cars for $80,000 from TriMet. If the project stays on track, construction could begin as early as the spring of 2014.

Finally, Metro in partnership with MoDOT and East-West Gateway concluded the Rapid Transit Connector Study which identified two potential routes for Bus Rapid Transit – the I-64 corridor and West Florissant – Natural Bridge route.   According to Metro, “BRT systems feature high-frequency service, limited stops at dedicated stations, and transit prioritization strategies to provide rail like service using bus vehicles.” Metro with its Board’s approval will move forward on identifying funding sources for these two corridor projects. More detailed information on the study can be found at http://www.movingtransitforward.org/stlrapidtransit/.

In addition to these four projects, much work was accomplished in 2013 to move development around transit forward – Transit Oriented Development- one of CMT’s goals in 2013. To date, CMT has tracked more than $16 billion in development within a half-mile of MetroLink since its opening but there is significant room for growth.  A TOD Study as a part of the HUD Regional Planning and Sustainability Grant was completed in 2013. This study included a framework for development around MetroLink in St. Louis, a toolkit to help facilitate TOD , and more detailed drill-downs on five stations. In addition, the City of St. Louis and CMT completed more in-depth studies of additional stations to help facilitate the movement of good development around stations in the St. Louis region.

So where does that leave transit in St. Louis and where do we go from here? The ever looming question of funding hangs over the St. Louis region and Missouri.   St. Louis County voters successfully passed Proposition A, 1/2 cent general sales tax in 2010 for transit, which also triggered the 1/4 cent sales tax passed in the City of St. Louis in 1997 to begin collections.  These initiatives generate about $78 million locally for transit operations and capital.  This is not enough.

There is a significant hole in funding sources when state funding is examined. While Illinois provides millions in funding to the St. Clair County Transit District for transit on the Illinois side of this region, Metro received little more than $200,000 last year from the State of Missouri for transit operations.   Without a state funding source, Metro and the State of Missouri are at a significant disadvantage to compete for federal dollars.  MoDOT recently released its proposed long range plan for transportation in Missouri. As a  part of their vision, they have identified two key areas that transit can deliver on – providing transportation choices for Missourians and using transit to improve the economic vitality of this state and create jobs.   MoDOT’s reiterated the fact a funding source is needed to move these types of plans forward.

So where does state funding stand? Right now, an initiative petition has been filed for a one-cent general sales tax for transportation in Missouri.  In addition, MoDOT is requesting an additional $2 million from general revenue for a total of $3,060,875 in state transit funding for State Fiscal Year 2015.

While these funding discussions continue, the St. Louis region needs to come to a consensus on the region’s transit priorities if funding actually does become available.  Right now, we have a list of ‘illustrative’ projects, but what project tops the list? Which of the options should be prioritized? Where should resources go if funding for public transit infrastructure becomes available?

And Here’s What You Can Do

As we head into 2014, CMT will be focusing its efforts on these two fronts – funding and prioritization of transit projects for the region. We will continue to keep our members and friends updated and advocate for the best possible options.  In the meantime, you can:

We are honored to partner with you to improve the St. Louis Region with transit and wish you a Safe and Happy New Year!