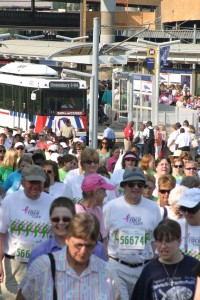 The 2014 Legislative Session is right around the corner, and Citizens for Modern Transit is going to be making the case for funding for transit on the local, state and national level as well as setting a list of transit priorities for the St. Louis region. CMT’s Legislative agenda adopted by the CMT Board on Tuesday,  includes working for state funding for public transit.

However, this still provides very little funding to Metro in the St.  Louis region as a match for federal capital dollars to expand our current system. The St. Louis region and the State of Missouri can be competitive on the national front without a significant investment in public transit in order to compete for federal dollars. Currently the local match is about 50 percent for most projects.

In addition, state funding for operations could help to free up more of the local funding raised for capital.  For every one dollar invested in public transit, there is a four dollar return to the region in economic activity.  We know that transit creates jobs during construction and beyond.   Reach out to your legislators and let them know transit needs to be important in Missouri and Illinois as a way to move our states forward.