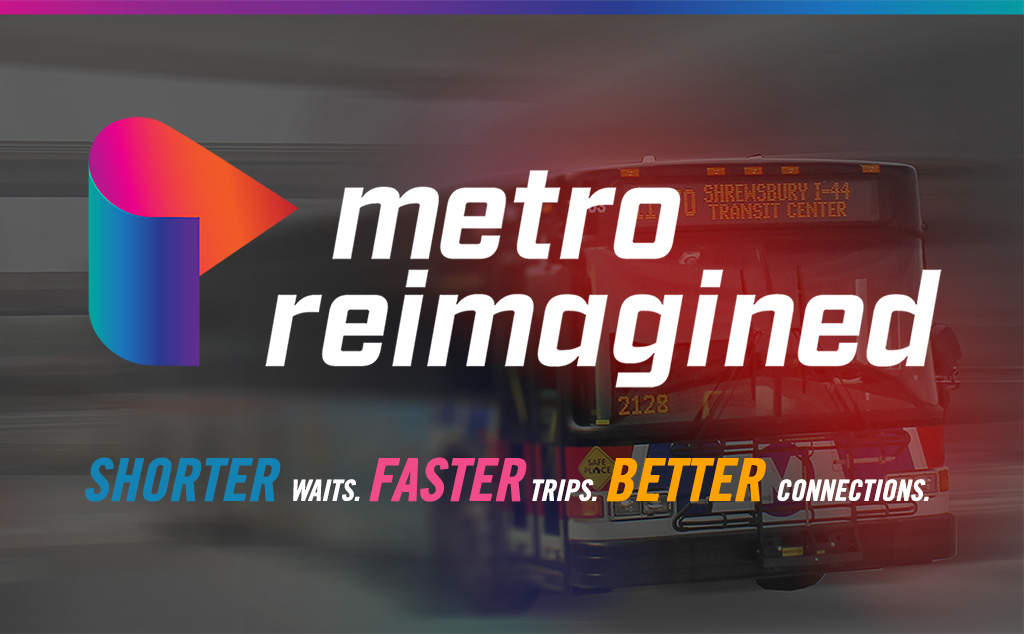 Metro Transit announced the new MetroBus Service Plan which will impact every bus route in the City of St. Louis and in St. Louis County. The new MetroBus Service Plan, which will be implemented on September 30, is the culmination of the 2-year Metro Reimagined project.  CMT will be partnering with Metro to help riders  manage the adjustment to a new bus stop or a new transit commute.

Ten routes, which carry nearly half of current MetroBus customers in Missouri, will offer service every 15 minutes or faster on weekdays. In comparison, the MetroBus system currently only has one bus route that offers that 15-minute frequency. In addition, the new service plan includes 35 MetroBus routes that will offer 30-minute frequencies, instead of the 40-minute or 60-minute service many routes operate on today.

“We know there will be riders who may need some assistance figuring out their new routes.  CMT is extending its Try & Ride program to all MetroBus riders who will no longer have service at their primary bus stop or bus route. The Try & Ride program will provide them  complimentary transit tickets for one month, giving riders time to test and learn the new system. In return, the program simply requires riders to commit to utilizing the bus or train for one additional month at your own expense for a total of two months,” said Kim Cella, Executive Director of CMT.

Weekend service is also being improved through the Metro Reimagined plan. Nearly all MetroBus routes will have Sunday service, including many routes that currently do not operate on Sundays. Service levels will also be consistent on Saturdays and Sundays. This improved service provides better options and more reliability for riders over the entire weekend.

Specific details about the new plan, including new route maps, schedules and route information, are available at metrostlouis.org/reimagined. Customers may also contact Metro Transit Information for details or for assistance planning their new commute. Metro Transit Information is available Monday through Friday from 7 a.m. to 6 p.m. by phone at 314-231-2345 or by text at 314-207-9786.

Metro riders can also plan their new transit commute directly from their mobile phones by using the Transit app, available on iOS and Android devices. By going to the Settings menu and selecting ‘Metro Reimagined’, customers will be able to view new schedules, route maps, and see what their transit trips will look like starting September 30.

From July 15, 2019 to December 15, 2019, riders that experience a change in their transit route due to the implementation of the Metro Reimagined plan in the City of St. Louis and St. Louis County will be eligible to enroll in the Try and Ride program one time.

If your stop has been marked for removal or relocation consider taking some of these steps:

The Metro Reimagined project was launched in 2017 to effectively position the Metro Transit system to meet the evolving transportation needs of the St. Louis region. After months of research, system analysis, and rider and community outreach, Metro was able to identify enhancements to the transit system and develop a new service plan that improves the customer experience and provides more frequent and more convenient transit options.

Community engagement and rider input have been a key part of the Metro Reimagined plan, starting in Spring 2017 when customer outreach first started. A draft plan was shared a year later, and customer feedback was collected and incorporated into a new draft plan, which was shared with the public in October 2018. Rider input has been an important part of each stage of the planning process, and adjustments to the service plan were made to retain service in areas, where possible, in response to the feedback.