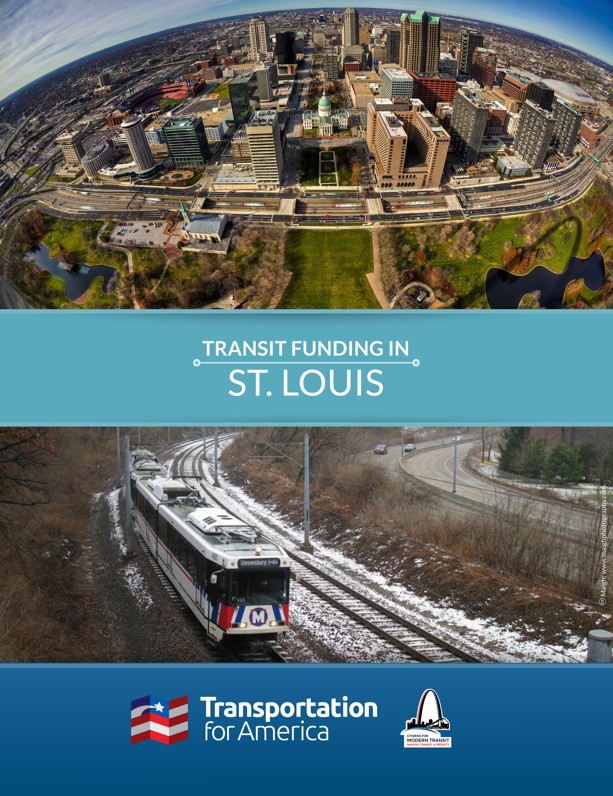 Citizens for Modern Transit (CMT) today released the results of its six-month Transit Funding Study conducted by Transportation for America. The findings, which were shared this morning at an event held in conjunction with the transit advocacy organization’s 30th anniversary, reinforced that major light rail expansion could be a reality for the St. Louis area via collaboration and the creative use of available funding mechanisms.

A number of local dignitaries, key stakeholders and business leaders gathered at the St. Louis Regional Chamber Collaboration Center in downtown St. Louis to hear from Beth Osborne, who is the Senior Policy Adviser for Transportation for America. Osborne reinforced that before anything else can be accomplished, stakeholders must agree on which local project will be the priority. From there, the best mix of federal, state and local funding mechanisms can be identified.

Based on the study findings, Osborne noted that the utilization of a wide variety of sources may be necessary for this region. She pointed to a range of options, including the Federal New Starts Program, Surface Transportation Program (STP) funds, Congestion Mitigation and Air Quality (CMAQ) funds, policy changes at the state level and a match provided by the Transportation Infrastructure Finance and Innovation Act (TIFIA). Osborne also stated that cities with strong transit systems almost always have funding support from the state.

“The transit funding study highlights what should become a regional priority with strong partnerships to move forward the best project that will impact the most people,” said City of St. Louis Mayor Francis Slay.  “A major light rail project between the City and the County, going both North and South, is vital to our economic growth.  More and better transit options could work as part of a purposeful strategy to improve upward mobility among our residents. Convenience, access, integration to economic opportunities and jobs, along with attracting and retaining talent should guide our decisions.”

CMT commissioned the Transit Funding Study in partnership with Transportation for American in November 2014 in an effort to draw attention to the overall lack of transit funding which continues to prevent large-scale, capital public transit projects from moving forward in the St. Louis region. There are several significant transit expansion and service innovation proposals that have already received extensive review and already enjoy substantial support in the St. Louis region. However, the overall lack of funding has prevented any of these (and similar) game-changing public transit projects from moving forward. Over the last six months, the experts behind the study assessed the current fiscal capacity for transit expansion and operation, analyzed the best practices of transit strategies nationwide and developed a menu of possible funding strategies for local consideration based on the analysis and findings.

“The purpose of this study wasn’t to unveil THE answer to the funding problem,” said Kim Cella, Executive Director of CMT. “We are going to have to think outside the ‘sales tax’ box and work as a united front on funding mechanisms and advocacy initiatives. This morning, we gave the region, and our stakeholders, a catalyst for discussion that will hopefully begin the process of creating the vision for the future of transit in St. Louis.”

The study identifies a list of methods for possible use in funding transit in the St. Louis region including federal programs, state programs and local sources.  No one source is the answer to the funding problem in St. Louis, however, herein lies the opportunity for the region. There are options that have worked successfully in other cities and are opportunities for this region.