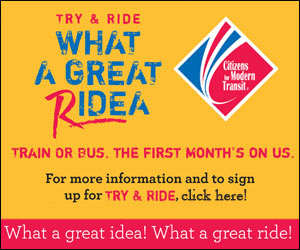 Just three-and-a-half months after Citizens for Modern Transit (CMT) rolled out its new Try & Ride program, aimed at helping area residents overcome some of the perceived hurdles associated with using MetroLink or MetroBus for their workday commute by “test driving” the transit system, the organization announced it has already exceeded its two-year participation goal. Since its launch on June 16th, more than 750 St. Louisans have registered for the program, and a large percentage of participants have decided to stick with transit beyond the terms of the program.

Each of the 750 Try & Ride participants received a personalized transit route from their home to work, tickets to ride transit for the first month, enrollment in the Guaranteed Ride Home Program, tips and tricks on how to ride, a commuter journal and more. Those who registered committed to using transit for two months. The cost of the first month of transit tickets was covered by CMT, while the cost of second month was the responsibility of the individual commuters. For those working at organizations that offer full or partial subsidies, transit passes for the second month’s ride were covered by the employers.

“We have known for some time now that many shy away from public transportation due to the fear of the unknown – they don’t know where to go and what to do,” commented Kim Cella, executive director of Citizens for Modern Transit. “The new Try & Ride program helps new users navigate the St. Louis transit systems and overcome perceived hurdles. The program results have been very compelling. In fact, more than 70 percent of the participants, who have completed the two-month program, have indicated that they plan to continue using transit for their work commute. These findings demonstrate how helping residents get over the fear of the unknown enables them to experience firsthand all of the benefits of taking transit. Once they realize the benefits, they stick with it.”

In addition to individuals getting on board transit with the Try & Ride program, CMT is beginning to see companies challenge their employees to participate. In September, CMT, in partnership with the St. Louis Green Business Challenge, launched the Try & Ride Green Business Leaders Commuter Challenge. St. Louis design firms Arcturis, Jacobs, Christner and the Lawrence Group are competing head to head to see how many of their employees will give transit a try for the work commute. Companies interested in participating in the spring challenge can send an email to info@cmt-stl.org.

Individuals region-wide are still able to register for CMT’s Try & Ride program, which is sponsored in part by the St. Clair County Transit District. For more information, visit www.cmt-stl.org or call (314) 231-7272. The organization can also be found on Facebook or Twitter @cmt_stl.