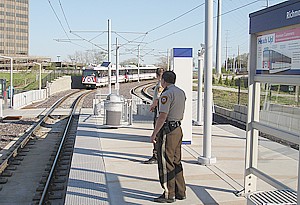 The East-West Gateway Executive Director was authorized this morning to enter into an agreement with WSP USA to lead the MetroLink System-Wide Security Audit.   WSP was selected from a group of six proposers by a selection committee with representation from St. Louis City, St. Louis County, St. Clair County, East-West Gateway and Bi-State.  The $400,000, 6 month study will take a comprehensive look at the MetroLink system from a security angle including technology, environmental design and human capital deployment.

Safety and security of the system has been a topic of discussion for much of the last year. Last May, St. Louis City Mayor Lyda Krewson, St. Clair County Board Chairman Mark Kern, and St.  Louis County Executive Steve Stenger, whose jurisdictions fund Bi-State Development, in addition to John Nations, CEO of Bi-State, signed a Memorandum of Understanding (MOU) outlining the plan to improve MetroLink security developed in cooperation with law enforcement. The MOU demonstrates unprecedented collaboration on the part of St. Louis City, St. Louis County, St. Clair County and Bi-State.

“CMT believes this comprehensive security audit is needed because there is no recent data on the best approach to improve access control on the system in our region.  A comprehensive system wide analysis can lay the groundwork for determining the best technology, environmental design changes and deployment of security staff resources moving forward to ensure a safe, secure and high-quality MetroLink system,” said Kim Cella, CMT Executive Director.

In addition, the Transit Advisory Working Group (TAWG), formed  under the MOU and of which CMT is a member, has taken significant and measurable steps to ensure that the Memorandum of Understanding (MOU) is being implemented to improve safety, restore public confidence and create the secure ridership experience that must be the hallmark of the MetroLink system. Efforts have included in addition to the security audit: