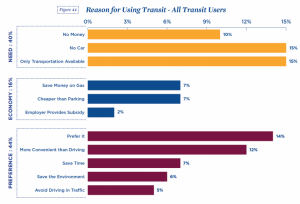 A recently released study compiled by the American Public Transportation Association, provides details on public transit passenger demographics to help answer the questions, who rides public transportation and how do they use it? Surveys were completed from 2008-2015 across 163 different transit systems and the results help paint the picture of public transportation in the US.

The largest group of public transportation users are ages 25-64 comprising 79% of all riders. Those 65 and older account for 7% of riders and those younger than 25 represent 14% of riders.

46% of those surveyed reported that they did not have a vehicle available to them while 36% they had one car available for their household.

The majority of transit riders, 65%, reported having a driver’s license while 35% did not.

How Do Riders Use Public Transit?

It was found that 87% of trips on public transit directly had an economic impact on the local economy. This impact comes in many forms including using transit to get to and from work, to go shopping, and for recreational spending trips. Another 6% of riders reported utilizing public transportation to get to school or university.

When looking at how riders get to their transit stop or station, 69% reported walking, 11% said they drove, and 10% used another mode of transit.