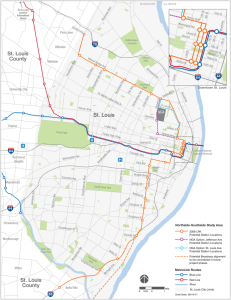 The Northside Southside Study is underway within the City of St. Louis.   Right now, residents have the opportunity to weigh in on what they would like to see, what potential stations they would use and more.

“This survey allows residents to view each proposed station, see pictures, and let the study team know which ones they are likely to use. It also asks respondents to rank their transit priorities like safety and security, bus connections, and cost.  In order for St. Louis residents to have their voices included in the decisions, they must weigh in. There is this study and the Metro ReImagined study. Whether you currently use transit or not, your opinion does matter with regards to the future of transit in St. Louis so please participate,” said Kim Cella, executive director of CMT.

The survey is available until October 31, 2017. Resident input is important to designing a project that riders want to use, people are proud to be part of their neighborhoods, and that brings economic development and opportunities to St. Louis. The study team has developed an interactive online survey for residents: https://northsidesouthsidestl.metroquest.com/.

Northside-Southside is a proposed on-street light rail transit expansion line that would run from South St. Louis County at I-55 and Bayless Rd. , north through Downtown, and northwest to I-70 and Goodfellow. The line was first studied in 2008 and is now being confirmed and restudied in hopes of applying for federal funding to begin the next phases of design and construction.

Maps of the proposed line and more information about the study, cost, and timeline are at www.northsidesouthsidestl.com.