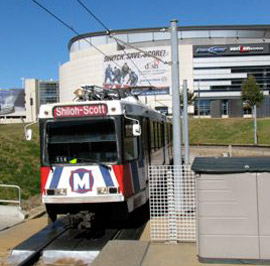 Over the last few days there has been a lot of press coverage on the GSA relocating 800+  U.S. Dept. of  Veteran’s Affairs employees from Downtown St. Louis to space on Page Ave.  There have been numerous reasons cited why this move is not beneficial for the region, the taxpayers, the employees and the visitors to the VA offices. As the local transit advocacy organization in St. Louis, Citizens for Modern Transit sees one key reason which should be critical to this decision making process – TRANSIT.

Coverage from these 18 lines and MetroLink provide connections to almost every area of the region from South St. Louis County to Olivette to Maryland Heights to South City to Maplewood to Valley Park to Ferguson to Jennings to Pagedale and Southwestern Illinois to name just a few.  The location of these offices not only provides the best access in the region for the employees of the VA, it offers the Veterans who reside in the region access to the offices as well. Moving to the Prevedel Federal Building on Page Ave. reduces this significant transit access down to one MetroBus line, #94. No one can dispute the fact the site still has transit access, however, for many employees who may currently be using transit this commute is no longer feasible or likely with the reduced accessibility.

In addition, there is a whole host of other benefits of being near such a concentration of transit services including walkability, access to other destinations and services in the downtown area and beyond, access to a larger employment pool, an enhanced benefits package with the CMT Guaranteed Ride Home Program in place and more.  We are continuously hearing from the federal government about the importance of building livable, sustainable communities with transportation options. In this region, Downtown St. Louis is that community.

While we realize transit is not the only reason to reconsider the decision, it is reason enough for the GSA to change its strategy and stay downtown.