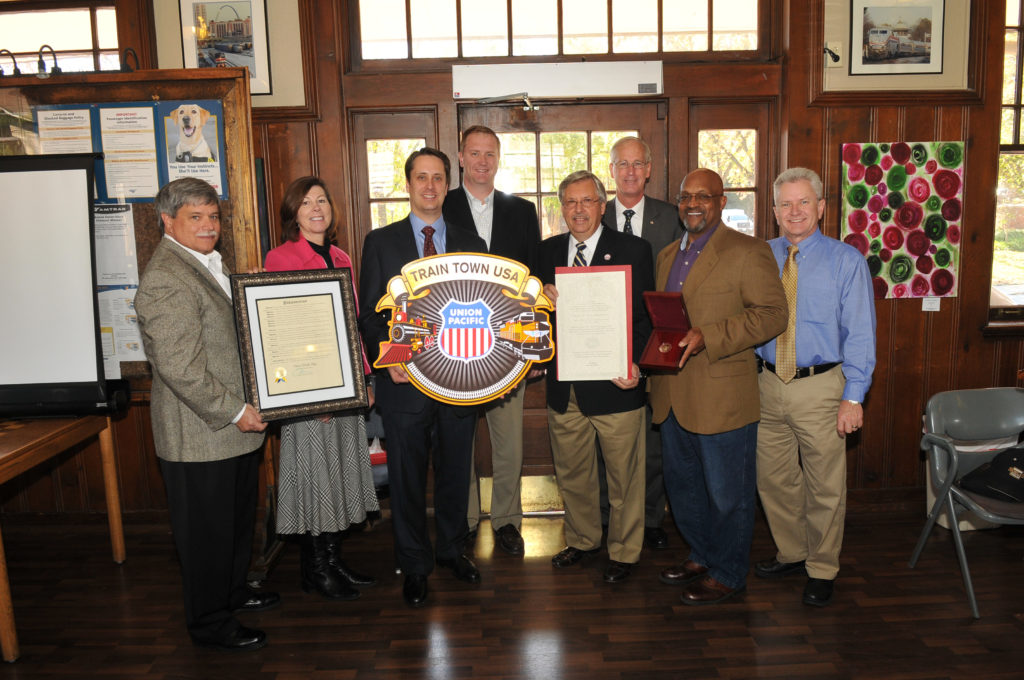 The City of Kirkwood has been recognized as a Train Town USA by the Union Pacific Railroad as part of their 150th anniversary celebration.   A public ceremony and presentation of the Train Town USA recognition was held on October 30.

Union Pacific developed the Train Town USA registry as part of its sesquicentennial celebration.  According to their Website:  “One hundred and fifty years ago, Union Pacific Railroad began building west from the Missouri River to the Pacific Ocean, opening a grand frontier to immigrants who settled in existing communities or started new ones along the rail lines.  That bond between our railroad and early settlements has strengthened and grown. Today, Union Pacific serves nearly 7,300 communities where we live, our children grow up, and in which we recruit employees. From rural town to metropolis, we’re honored to have unique, long-standing community relationships.”

The City of Kirkwood was the first planned suburb west of the Mississippi River and an early railroad commuter suburb.  It owes its very existence to the railroad. The City, established in 1853, was named after James Pugh Kirkwood, the engineer in charge of locating, surveying, and building the railroad.  The City’s train station, located in the downtown business district, was built in 1893 and is listed on the National Register of Historic Places.  It was purchased by the City in 2003 and is staffed by volunteers, who assist Amtrak passengers daily.

More information about the Train Station can be found here:  http://www.kirkwoodmo.org/content/2014/historic-kirkwood-train-station.aspx