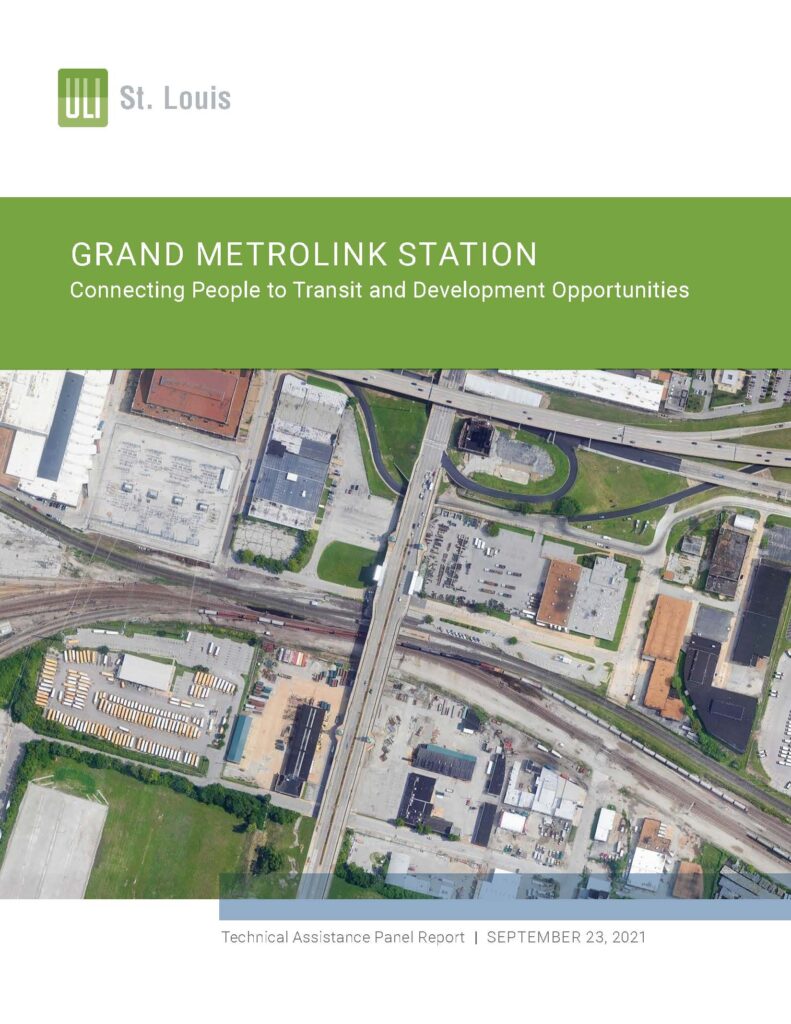 The Grand MetroLink Station in Midtown St. Louis is “an island.”  It is disconnected from exciting new developments while transit riders, other pedestrians, and bicyclists have limited options for mobility around the area.  If momentum in innovative development is to be advanced in the surrounding area, the Grand MetroLink Station must offer greater connectivity.  That’s the assessment of the Urban Land Institute St. Louis (ULI STL) which collaborated with Citizens for Modern Transit (CMT) and St. Louis Midtown Redevelopment Corporation in studying the area’s potential for future development.

The just-released report is the second Technical Assistance Panel (TAP) study by ULI of the Grand MetroLink Station.  Nearly 10 years ago, ULI delivered a TAP of the Midtown station at the request of CMT.  Some of the 2012 TAP recommendations were adopted, including the formation of a redevelopment corporation and the development of Chouteau Greenway, now known as the Brickline Greenway.  Since then, surrounding neighborhoods have been energized by historic redevelopment, such as the Armory and City Foundry, and the development of new residential options just south of the MetroLink station.  But the area remains difficult to traverse as a pedestrian, lacking key connections to and from Grand, transit, and what are or will be key development sites. “The car reigns supreme on Grand Boulevard and throughout the surrounding area,” commented Chris Beard, of Lochmueller Group, who served as chair for this latest TAP.

The area studied in the TAP is bordered loosely by Interstate 64/40 to the north, Chouteau Avenue to the south, South Theresa Avenue to the east, and South Spring Street to the west, and generally encompasses what should be a five-minute walk from the Grand MetroLink Station.  Much of the study focused on connectivity surrounding the station, but it also looked at optimizing the marketability of the area.  Among the TAP recommendations:

Leading the effort in collaboration with ULI were Kim Cella of Citizens for Modern Transit, and Brooks Goedeker of St. Louis Midtown Redevelopment Corporation. ULI members conducting the TAP included:

The full report can be found at this link.