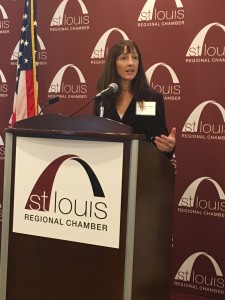 Uber, ridershare and new technologies were all a part of the discussion at the CMT Talking Transit event sponsored by the St. Louis Regional Chamber on Oct. 18 on the Metro ReImagined Study underway in St. Louis.  The large-scale, comprehensive study of the MetroBus System in St. Louis began this past spring.

According to Metro Assistant Executive Director of Planning and System Development Jessica Mefford-Miller, “As mobility needs and transit demand evolves in our region, Metro is working to implement changes to our transit system that better aligns service to customer needs, within the available resources the region provides for transit and other mobility solutions. This ongoing effort has intensified recently as part of a project we kicked off this spring called Metro Reimagined. This work is taking a proactive look at the mobility needs of the St. Louis region to help us make decisions about the type of transit service that is best suited for each of the many markets we serve (the “type” of transit service includes frequency, schedule, route alignment, vehicle types, amenities, technology, etc.).”

According to Metro, two-thirds of their customer base are bus riders, and 10 MetroBus routes account for 50 percent  of all MetroBus boardins with the #70 Grand leading the way.  Possible options for the future outlined included:  Light rail expansion, Enhanced Bus Transit, Frequent Local Bus service, Supporting Local bus service, and community mobility such as Uber. 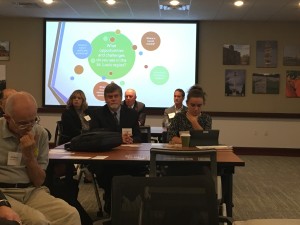 Other cities have undertaken similar ‘re-visioning’ with success:

“We know that more and better transit options in the ST. Louis region could work as part of a purposeful strategy to improve t access to jobs, education and healthcare. Convenience, access, integration to economic opportunities and jobs, racial and social equity along with attracting and retaining talent are all reasons we need to move transit forward.  While the region is currently investing in large scale capital studies with timelines for expansion from 8 to 20 years, there is an opportunity in the short term to re-imagine the St. Lbus system in order to make impactful changes to this community right away – in a year or less,” said Kim Cella, executive director of CMT.