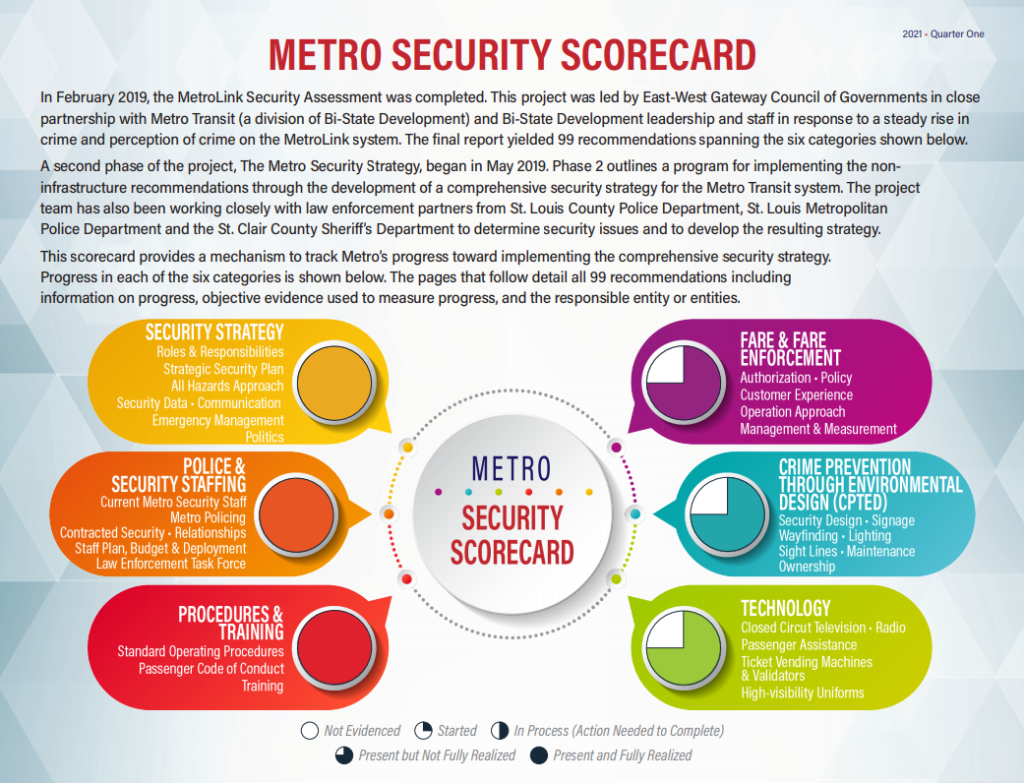 Progress continues to move progress on security strategies according to the March 2021 issue of the Metro Security Scorecard. Since September 2019, WSP and East-West Gateway have presented the Scorecard updates each quarter.

In February 2019, the MetroLink Security Assessment was completed. This project was led by East-West Gateway Council of Governments in close partnership with Metro Transit (a division of Bi-State Development) and Bi-State Development leadership and staff in response to a steady rise in crime and perception of crime on the MetroLink system. The final report yielded 99 recommendations spanning the six categories shown below.

A second phase of the project, The Metro Security Strategy, began in May 2019. Phase 2 outlines a program for implementing the non-infrastructure recommendations through the development of a comprehensive security strategy for the Metro Transit system. The project team has also been working closely with law enforcement partners from St. Louis County Police Department, St. Louis Metropolitan Police Department and the St. Clair County Sheriff’s Department to determine security issues and to develop the resulting strategy.

This scorecard provides a mechanism to track Metro’s progress toward implementing the comprehensive security strategy from a third-party perspective.

Some highlights in each of the six areas from the most recent Scorecard follows:

Significant progress has been made under this category.  In the area of Communication, efforts are still underway for a shared radio channel for public safety officers and local law enforcement.   In addition, there was some slide backwards with regards to de-politicizing the conversation about Metro Public Safety which played out in the news.

This is another area that is just about at completion.  The only areas that are not fully implemented under Police and Security Staffing have to do with training.

Significant work has been done this quarter on updating Metro Security’s Standard Operating Procedures (SOPs).  Progress was demonstrated on the training program as a part of the Security Plan including security awareness training on issues that may arise on the system including mental illness and disorderly behavior.

Metro now has approved citation authority in all jurisdictions through which it operates, and can enforce fare evasion. There is still opportunity under management and measurement of fare enforcement  as well as work on clear, consistent and transparent policies with regards to fare enforcement.

CPTED improvements are still underway.  Work to move all lights to LED lighting at stations, a maintenance program for lighting and improved sight lines at stations is still ongoing work.

Metro is collaborating with law enforcement partners on sharing real-time data from their CCTV feeds. Cameras are being updated as budgets allow.  Progress on radio communication is taking place in the form of training and protocols. Significant movement this quarter on developing communication protocols and standards that are strictly followed and enforced for effectiveness and professionalism.

“It is encouraging to see continuous progress on the St. Louis Metro Transit Security Plan especially through a third-party inspection like the scorecards led by WSP and East-West Gateway.  Transit is essential to the St. Louis region whether individuals ride or not, and security is a key component of the success of the system,” said Kim Cella, CMT Executive Director.

The quarterly scorecards will continue for the next year in order to ensure success of the Transit security program at Metro Transit.