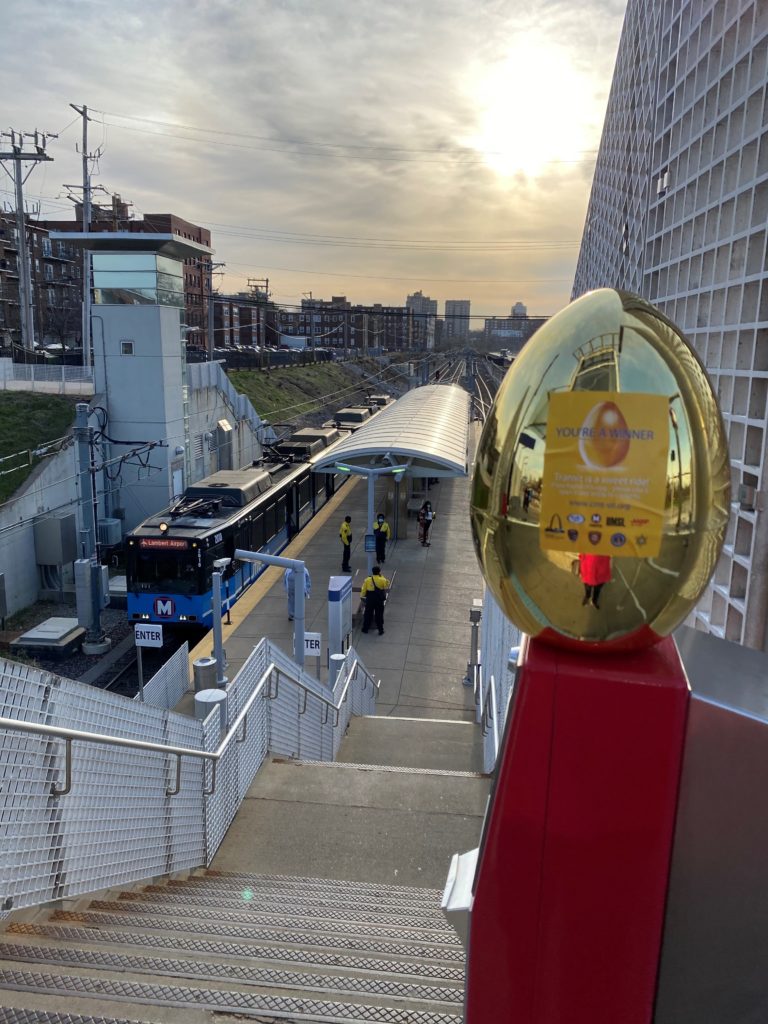 To encourage area residents to utilize transit to get where they need to go – Citizens for Modern Transit in partnership with Metro Transit, St. Clair County Transit District, UMSL, AARP in St. Louis, Bureau of Transit Police and Metro Transit Public Safety hosted a rider “Sweet Surprises” event on March 22. The event was held in conjunction with the start of spring, which will officially got underway a couple days earlier. Partners hid in plain sight hundreds of golden, prize-filled eggs at Metro Transit Centers during the morning commute as well as on MetroLink, MetroBus and Call-A-Ride. If a transit rider found an egg, they kept it and its contents.

The golden eggs “hidden” at Metro Transit Centers were filled with chocolate bunny candy, swag from event partners and free transit passes, including either a two-hour pass, a one-day pass, a weekly pass or a month-long pass. Transit riders who found an egg cutout on MetroBus and MetroLink vehicles received similar prizes. To encourage social media engagement, transit riders who found any of the eggs could post a selfie of themselves on Facebook or Twitter, using one of the event hashtags noted on the eggs, will be eligible for a drawing for a $100 gift card.

“Public transportation is a safe, cost-effective, convenient means for getting to work, school, medical appointments and entertainment venues – or to gain access to groceries, prescriptions and other necessities,” said Kimberly Cella, executive director of Citizens for Modern Transit. “We used this event to encourage people to hop on transit and experience why it’s such a sweet ride.”

This event provided a valuable and fun opportunity to talk about transit and for the partnering organizations to interact with riders, strengthen relationships and reinforce their collective commitment to a safe, world-class, customer-focused transit experience.