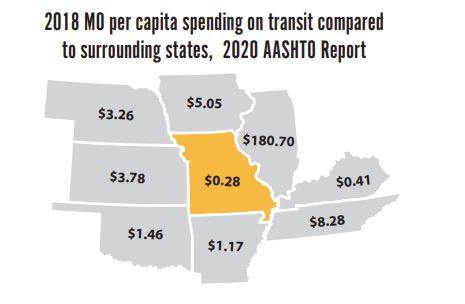 The latest COVID relief bill passed by Congress on December 21 provides $14 billion for additional public transit support, however, the focus is on urban areas across the country.   In Missouri, Kansas City and St. Louis will receive an additional $99.4 million in 2021 in relief funding ($31.1 billion and $68.3 million respectively according to analysis from the Federal Transit Administration (FTA)). According to the breakdown, 138 of the 500 urbanized areas across the country will receive funding under the new bill.

This underscores the need for Missouri to invest in public transit in 2021.  Right now, the Missouri Highway and Transportation Commission has a new ask for $6.7 million from General Revenue for operating for the 34 transit providers across the state.  This would make the total ask $8.4 million for public transit – a return to 2002 funding levels.   Missouri’s transit providers are delivering economic returns in the state including $3.67 billion in direct and indirect economic activity according to a 2019 report.  Now is the time to ensure this investment continues to move Missouri in the right direction.  Contact your state Senator and Representative today.