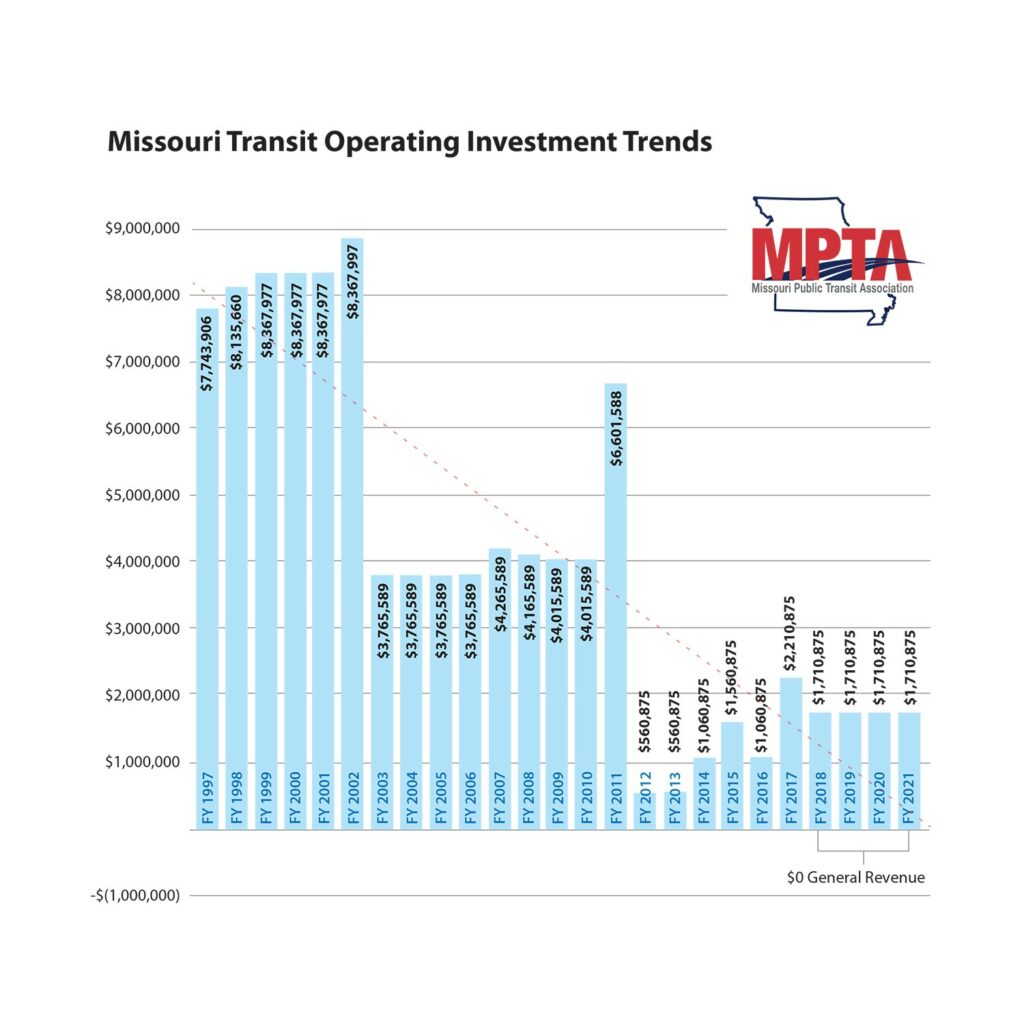 As the 2022 Missouri Legislative session moves towards the halfway mark, conversations continue around transit funding. The last several years, transit operating investment in Missouri has remained at $1.7 million from the state transportation fund.

MoDOT’s request for SFY2023 was $8.7 million for transit operating assistance.   This included $1.7 from the State Transportation Fund and $7 million from General Revenue.

Funding included in the 2023 Governor’s Budget for Transit released in January included:

“We are pleased to see the allocation of ARPA funds to our rural providers in the Governor’s budget. This one-time federal funding will help those providers continue essential service as we navigate through the pandemic.   MPTA, however, will continue to advocate and work with state legislators to ensure state support for all transit operators in the final budget.  This state funding piece, MoDOT’s request of $7 million from General Revenue plus the $1.7 million from State Transportation Fund, is critical to providing matching funds for the new Infrastructure Investment and Jobs Act (IIJA) which has a 30 percent increase in funding for transit in the first year,” said Kimberly Cella, CMT Executive Director.

The five-year, $1.2 trillion IIJA Act passed in 2021 provides $91 billion in federal funding for transit. These dollars could significantly influence Missouri’s ability to provide critical access to jobs, healthcare, and education – however, there is a catch. Non-federal or local match funds are required. Without it, states will be leaving federal funding on the table.

Therein lies the crux of the issue in Missouri. The Show-Me State ranks 45th in the nation with regards to transit investment. For the last four years, Missouri has only allocated $1.7 million in local funding for transit and that total is split between 34 transit providers. Any federal funding support for transit operations requires a 50:50 match, and capital programs need an 80:20 match. Missouri transit providers have worked diligently to identify local funding sources through sales tax, private contracts, and more, but the most significant missing link in the formula is the lack of state funding.

CMT and its partners continue to advocate for $7 million in general revenue to be included.  Here is an estimated breakdown of that funding for some of our providers per the Missouri distribution formula.

Supporters of transit are asked to reach out to your state representatives and senators asking for their support of the $7 million in general revenue for transit.  Now is not the time to leave federal funding on the table for Missouri.