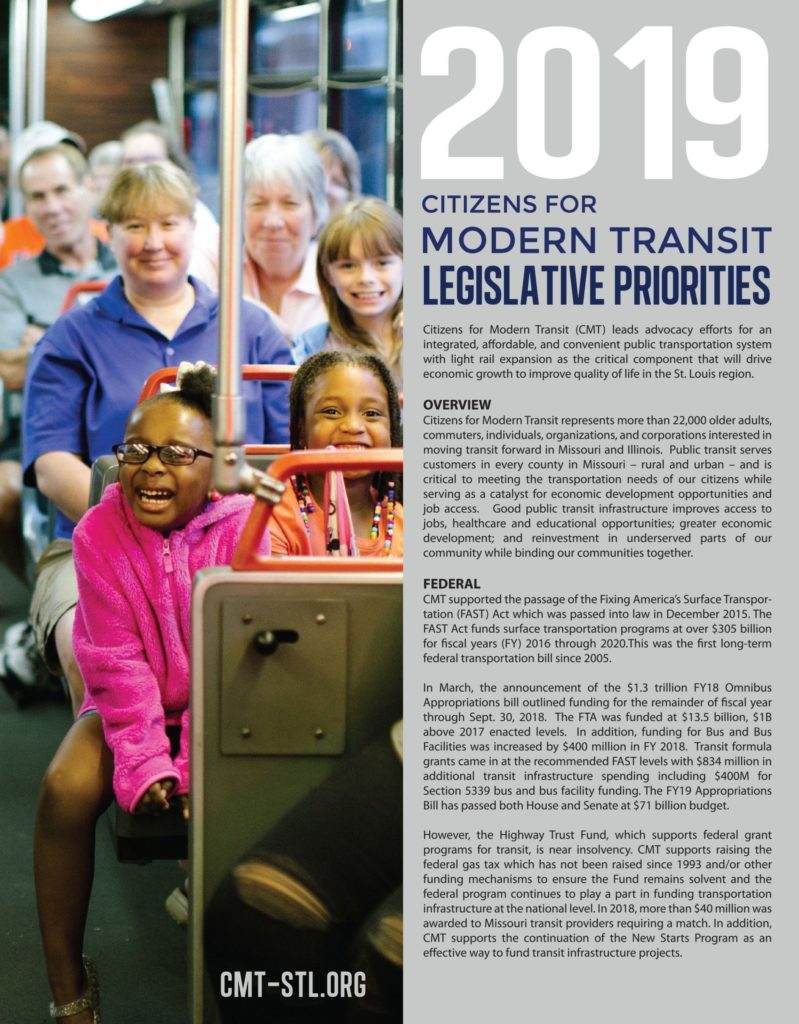 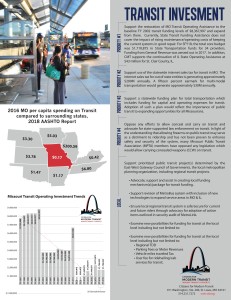 Transit funding, regional transit priorities and safety top the list of CMT’s legislative priorities for 2019.  Citizens for Modern Transit recently released its FY19 Legislative Priorities. The economic future of the State of Missouri is tied directly to our commitment to funding of the State’s infrastructure.

Investment in public transit throughout Missouri delivers proven economic results, and promotes private development and reinvestment in both rural and urban under-resourced communities. Community leaders across the State have identified public transit priorities that will increase service and yield significant positive economic returns. These plans will improve access to opportunity, attract talent, and create thousands of jobs .  CMT will be advocating for local, state and federal policies and funding for operating and capital for transit to provide an opportunity for these plans to come to fruition. In addition, safety and security continue to top the list of local priorities for the organization.

CMT supported the passage of the Fixing America’s Surface Transportation (FAST) Act which was passed into law in December 2015. The FAST Act funds surface transportation programs at over $305 billion for fiscal years (FY) 2016 through 2020.This was the first long-term federal transportation bill since 2005.

In March, the announcement of the $1.3 trillion FY18 Omnibus Appropriations bill outlined funding for the remainder of fiscal year through Sept. 30, 2018.  The FTA was funded at $13.5 billion, $1B above 2017 enacted levels.  In addition, funding for Bus and Bus Facilities was increased by $400 million in FY 2018.  Transit formula grants came in at the recommended FAST levels with $834 million in additional transit infrastructure spending including $400M for Section 5339 bus and bus facility funding. The FY19 Appropriations Bill has passed both House and Senate at $71 billion budget.   However, the Highway Trust Fund, which supports federal grant programs for transit, is near insolvency. CMT supports raising the federal gas tax which has not been raised since 1993 and/or other funding mechanisms to ensure the Fund remains solvent and the federal program continues to play a part in funding transportation infrastructure at the national level. In 2018, more than $40 million was awarded to Missouri transit providers requiring a match. In addition, CMT supports the continuation of the New Starts Program as an effective way to fund transit infrastructure projects.

Priority #1
Support the restoration of MO Transit Operating Assistance to the baseline FY 2002 transit funding levels of $8,367,997 and expand from there.  Currently, State Transit Funding Assistance does not cover the impact of rising maintenance/operating costs of keeping the current systems in good repair. For SFY18, the total core budget was $1,710,875 in State Transportation funds for 34 providers. Funding from General Revenue was zeroed out in 2017.  In addition, CMT supports the continuation of IL State Operating Assistance at $43 million for St. Clair County, IL.

Priority #3
Support a statewide funding plan for total transportation which includes funding for capital and operating expenses for transit. Adoption of such a plan would reflect the importance of public transit to expanding opportunities for all Missourians.

1.  Please contact your legislators now as we head into 2019 to express your interest in transit funding.  There are many new legislators taking office this session and will need to hear from their constituents that transit makes a difference.

2.  Continue reading CMT’s eblast and blog postings that will keep you updated on where things stand.

3.  Call, visit or email your state legislators about the need for a state funding plan for transit

4. Contact Governor Parson about the need for Missouri to support public transit especially as conversations continue about transportation funding with the defeat of Prop. D.

5. Make sure your locally elected officials also hear from you on the importance of transit.

6. RIDE TRANSIT, and invite others to get on board with you.

Thank you in advance for all you do to make St. Louis a better place to be with Transit!