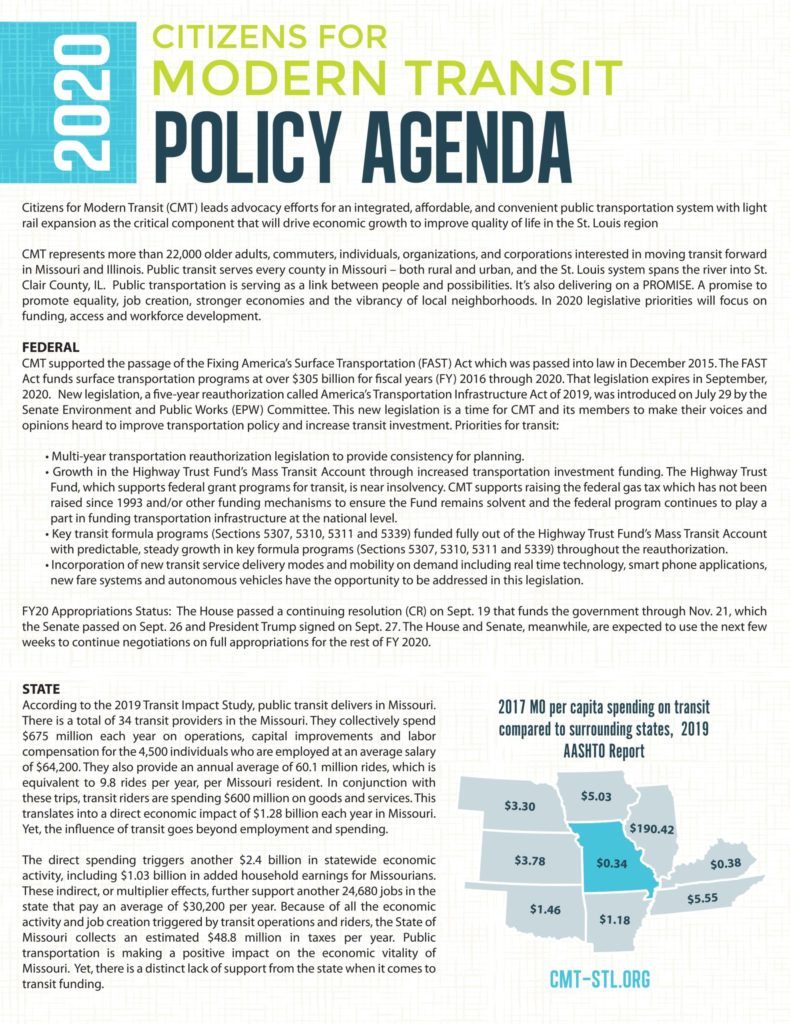 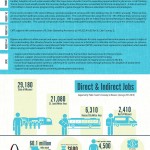 Transit funding, regional transit priorities and safety top the list of CMT’s Policy Agenda for 2020.  Citizens for Modern Transit recently released its FY19 Legislative Priorities. The economic future of the State of Missouri is tied directly to our commitment to funding of the State’s infrastructure.  Public transit serves every county in Missouri – both rural and urban, and the St. Louis system spans the river into St. Clair County, IL.  Public transportation is serving as a link between people and possibilities. It’s also delivering on a PROMISE. A promise to promote equality, job creation, stronger economies and the vibrancy of local neighborhoods. In 2020 legislative priorities will focus on funding, access and workforce development.

STATE
According to the 2019 Transit Impact Study, public transit delivers in Missouri. There is a total of 34 transit providers in the Missouri. They collectively spend $675 million each year on operations, capital improvements and labor compensation for the 4,500 individuals who are employed at an average salary of $64,200. They also provide an annual average of 60.1 million rides, which is equivalent to 9.8 rides per year, per Missouri resident. In conjunction with these trips, transit riders are spending $600 million on goods and services. This translates into a direct economic impact of $1.28 billion each year in Missouri. Yet, the influence of transit goes beyond employment and spending.

The direct spending triggers another $2.4 billion in statewide economic activity, including $1.03 billion in added household earnings for Missourians. These indirect, or multiplier effects, further support another 24,680 jobs in the state that pay an average of $30,200 per year. Because of all the economic activity and job creation triggered by transit operations and riders, the State of Missouri collects an estimated $48.8 million in taxes per year. Public transportation is making a positive impact on the economic vitality of Missouri.  Yet, there is a distinct lack of support from the state when it comes to transit funding.

Priority #1
Support a statewide funding plan for transit access for workforce development training.  Currently, there are hundreds of job training programs – the foundation for successful workforce development – across Missouri which are not accessible due to transportation hurdles. Adoption of such a plan would reflect the importance of public transit to expanding opportunities for job access.  A Job Training Transit Access Fund would provide the necessary bridge to move Missourians successfully to full-time employment.   A state investment of $8 million in transit access programming would be a game changer for Missouri education institutions and employers. Unemployment rate is so low at 3.1 percent, employers have to reach out to communities that have traditionally been overlooked to find new pools of employees.

Every transit provider in the state of Missouri provides paratransit services with rides totaling close to 2 million annually.  These services are essential for healthcare access, job access, and education.   The costs of these rides range from $12 – $93. Without these services, many in Missouri would not be able to live let alone prosper.   CMT is supporting the $3 million earmarked from General Revenue in MoDOT’s budget for paratransit subsidies.   This subsidy will provide much needed, predictable funding for MO providers to ensure this service is provided.

1.  Please contact your legislators now as we head into 2020 to express your interest in transit funding.  There are many new legislators taking office this session and will need to hear from their constituents that transit makes a difference.

2.  Continue reading CMT’s eblast and blog postings that will keep you updated on where things stand.

3.  Call, visit or email your state legislators about the need for a state funding plan for transit

4. Contact Governor Parson about the need for Missouri to support public transit especially as the Governor calls for bold transportation solutions in Missouri.

5. Make sure your locally elected officials also hear from you on the importance of transit.

6. RIDE TRANSIT, and invite others to get on board with you.

Thank you in advance for all you do to make St. Louis a better place to be with Transit