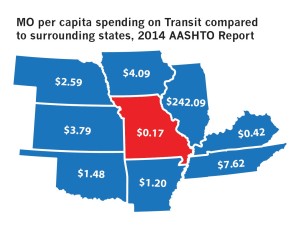 Greitens announced Monday afternoon that he was restricting, or cutting, $146.4 million from the current Missouri fiscal year’s budget. Withholdings included nearly $68 million from core funding to four-year colleges and universities and community colleges. Included in his cuts, was $121,250 in transit funding. This represents one-fourth of the funding for transit operations from General Revenue ($485,000).

In 2016, funding for the transit assistance program included an increase of $1,150,000 in State Transportation funds. This was in addition to the $1,056,000 in General Revenue and State Transportation funds which were funded the prior.  Total budgeted for transit assistance in 2016 was $2.206 million.   This funding is distributed based on a formula among 32 transit providers in MO.

The current withhold will come out of the $485,000 from the General Revenue portion of these funds.