Citizens for Modern Transit reported the findings of a six-month study designed to quantify the economic impact of public transit services in the state of Missouri to area leaders today at its quarterly “Talking Transit “ event held at the St. Louis Regional Chamber Collaboration Center. Highlights, including the fact that the direct and indirect impact of public transit in Missouri this year exceeds $3.67 billion, were reported before the conversation switched gears to underscore the distinct lack of state funding for transit in Missouri despite its economic return.

The first-of-its-kind study, commissioned in partnership with the Missouri Public Transit Association and AARP in St. Louis, was led by Robert M. Lewis, FAICP, CEcD, an independent consultant and assistant professor of Urban Planning & Development at Saint Louis University. He revealed the following findings of the 2019 Economic Impact of Public Transit Services in the State of Missouri study:

The study also confirmed that Missouri transit providers serve every county in the state. The highest density of transit utilization is found in the urban areas of St. Louis and Kansas City, but there is access to public transportation in all rural areas and small towns. It also highlighted a distinct lack of support from the state when it comes to transit funding – pointing to Bi-State Development as a local example. Bi-State Development operates the MetroBus and MetroLink in St. Louis. It has a $2.68 billion impact on the region and provides 21,080 jobs. Yet, it received less than $1 million from the state of Missouri for its FY2017 budget of $303 million. The remainder came from federal funding and local sources.

“This pinch is not limited to St. Louis – it is being felt across the state as Missouri currently allocates $1.75 million per year for public transit, a total that must be divided among all 34 transit providers,” commented Lewis during his presentation. “This amounts to 34 cents per Missouri resident, which is similar to Kentucky, but less than a third of Arkansas and one quarter of Oklahoma, and is almost insignificant when compared to Illinois. Of nine bordering states, Missouri has the 8th largest GDP and the slowest growing GDP since the Great Recession.”

After Lewis reported his findings, a panel of local stakeholders weighed in on the outcomes and discussed how the information can be utilized to build the case for more state and federal funding for transit.

Missouri Senator Jamila Nasheed, representing the 5th district, was among the panelists. She applauded Citizens for Modern Transit for taking the lead on this very important and thorough study. “I’ve learned a lot today,” stated Missouri Senator Nasheed. “The state has a budget of approximately $30 billion. How do you cultivate a transit system with only $1.75 million? And that’s not $1.75 million for one transit provider. That number is divided by 34. It is appalling to me. We have some work to do. We have to be able to go to up there (Jefferson City) and say enough is enough – put the money where it matters. Because at the end of the day, this economic impact report shows how much transit is generating for the state of Missouri.”

“The hole that exists in each transit provider’s budget is funding from the state of Missouri – it is missing from the equation,” added Kimberly Cella, executive director of both Citizens for Modern Transit and the Missouri Public Transit Association. “That is why we did this study. State funding is at a record low. Missouri ranks 47th in the country for state funding. Some of our transit providers are getting as little as $5,000 from the state. We’ve got to be bold. The state has to do better. Whether you ride transit or not, Missouri’s investment in transit is key to the economic viability of this state.” 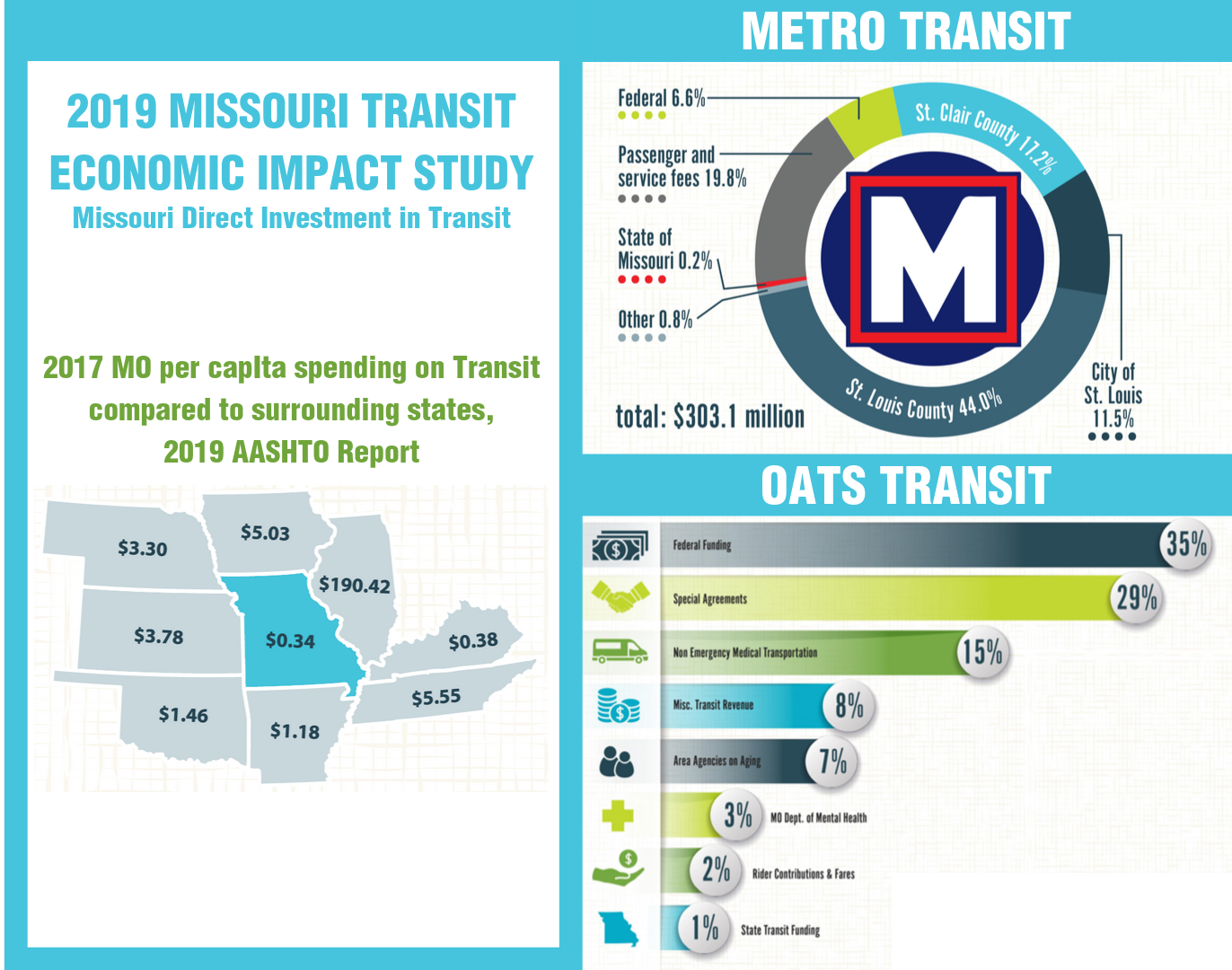