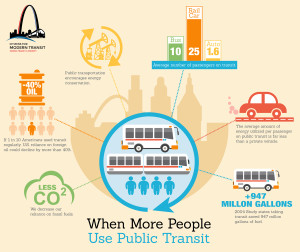 More and better transit options in the St. Louis region can be a part of a purposeful strategy to improve upward mobility among St. Louis residents. As the regional transit advocacy organization, CMT continues to advocate for the region to come to consensus on a priority project(s) while simultaneously building a funding package to make those priorities a reality.  Convenience, access, integration to economic opportunities and jobs, along with attracting and retaining talent are all reasons we need to move transit forward.  Transit is an investment for the future of this region.

Transit is worth the investment for job creation, economic development opportunities, and sustainability for the region.

o    According to national transit experts, public transportation produces 95% less carbon monoxide, 90% less volatile organic compounds (vocs) and about half as much carbon dioxide and nitrogen oxide per mile compared to private vehicles.

o    With more people using public transit, we decrease our reliance on fossil fuels. If one in 10 Americans used transit regularly, U.S. reliance on foreign oil could decline by more than 40%, or nearly the amount of oil imported from Saudi Arabia each year.  Public transportation encourages energy conservation, as the average number of passengers on a transit vehicle (10 for bus, 25 for a rail car) far exceeds that of a private automobile (1.6). Even as a single transit vehicle consumes more energy than a private vehicle, the average amount of energy utilized per passenger is far less.  In fact, a study by ICF International found that in 2004, taking transit saved 947 million gallons of fuel that would have been used if transit passengers had driven cars instead.

o    Congestion relief through the use of transit also saves fuel as vehicles stuck in gridlock waste fuel and generate emissions. The Texas Transportation Institute’s 2007 Mobility Report estimates that if public transportation service was discontinued nationwide and the riders traveled in private vehicles instead, urban areas would have suffered an additional 541 million hours of delay and consumed on the whole 340 million more gallons of fuel in 2005. The value of the delay and fuel that would be consumed if there were no public transportation service would be an additional $10.2 billion congestion cost, a 13 percent increase over current levels.

o    Transit can also reduce greenhouse gas emissions by facilitating compact development, which conserves land and decreases the distances people need to travel to reach destinations. – Cortex is a prime example – 200 acre innovation community including employment, retail, and residential.  The Boyle Street Station will serve as the linchpin project for the district, and several companies moving into the district have cited convenient public transit as reason for locating there.

o    Transit can drive economic development and job growth.  At least $6.759 billion in investment has been tallied along the Minneapolis Green line and Blue line and the proposed Southwest and Blue light rail extension projects according to the Minneapolis Metropolitan Council.   “Businesses continue making strategic investments along existing and planned light rail lines, demonstrating their conviction that light rail is a valuable asset to local communities along these routes,” Metropolitan Council Chair Adam Duinninck. In addition, millions in development have occurred within walking distance of the Kansas City Streetcar project.  Fixed rail transit projects can be a catalyst for development. 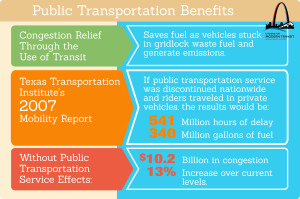 o    Finally, transit can minimize its own greenhouse gas emissions by using efficient vehicles, alternative fuels, and decreasing the impact of project construction and service operations. For example, the City of Columbia, MO is moving towards an all electric bus fleet.  Over the long term they have found not only is it more beneficial for the environment, it is much more cost effective.