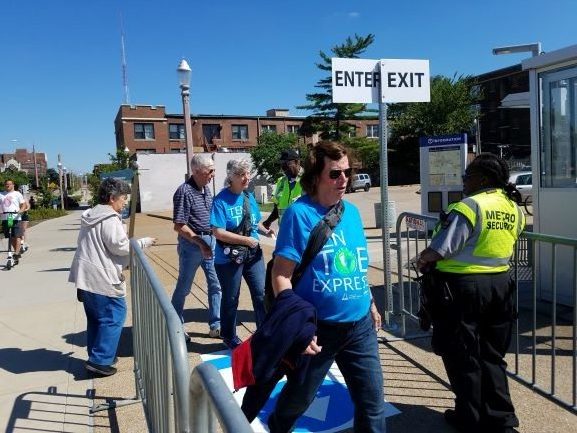 The Transit Advisory Working Group (TAWG), which is comprised of twelve organizations from around the bi-state area, today released its 2018 Progress Report. The purpose of the report is to update elected officials, stakeholders and the public on progress being made to improve safety and security on the MetroLink system – an issue that remains a priority for the St. Louis region. It’s a concern that has united leadership on both sides of the river, and while a lot of work remains, significant and measurable steps have been taken to help improve safety and restore public confidence.

The TAWG was assembled in May 2017 in response to a Memorandum of Understanding (MOU) that was established and signed by regional elected officials and Bi-State Development representatives to jointly address safety and security on the MetroLink system. The TAWG is comprised of a diverse cross-section of riders, drivers and regional stakeholders that include representatives from Amalgamated Transit Union Local 788, Citizens for Modern Transit (CMT), East-West Gateway Council of Governments, Organization for Black Struggle, Metro Transit, SEIU Local 1, St. Louis Community College, St. Louis Regional Chamber, St. Clair County Transit District, University of Missouri-St. Louis, and Washington University, as well as prosecutors and law enforcement officials from the City of St. Louis, St. Louis County and St. Clair County.

According to the TAWG’s 2018 Progress Report, priority has been placed on the completion of several key objectives outlined in the MOU. Accomplishments include the establishment of a headquarters for the MetroLink Police Unit; a security audit of the system; the administration of a pilot access control program, and the development of a “ride and abide” policy to deter riders who have committed certain crimes from entering or remaining within Metro Transit property or territory.

Another accomplishment for the TAWG was the formation of a Joint Task Force to enable law enforcement officers from the St. Louis Metropolitan Police Department, St. Louis County Police and St. Clair County Sheriff’s Department to collectively and effectively patrol the MetroLink system. The Joint Task Force delineates and educates law enforcement and security staff on the specific responsibilities and duties of each level of public safety, provides greater officer presence to boost public confidence and helps create a secure ridership experience. Captain Scott Melies is the commander of the Bureau of Transit Police. Lt. John Blaskiewicz, of the St. Louis Metropolitan Police Department, coordinates the rail-related safety and contracts security staff from the Metro Public Safety Department, operated by Bi-State Development. There is a total of 67 police officers dedicated specifically to MetroLink security.

A MetroLink Police Unit Headquarters was established in late summer of 2017 at 5977 Delmar Blvd, adjacent to the Delmar MetroLink Station. It continues to be utilized for the daily operations of the Joint Task Force.

St. Louis County Police Officers continued the expansion of their coverage to include MetroLink stations within the boundaries of the City of St. Louis. All of these city and county police officers in Missouri have St. Louis City-County reciprocal authority via current law. The St. Clair County Transit Board also allocated $125,000 to fund the hiring of three additional St. Clair County Sheriff’s deputies to help cover expanded MetroLink patrols to the Missouri side of the river. The St. Louis City Board of Aldermen passed Board Bill #37, authorizing a mutual aid agreement for St. Clair County Sheriff’s deputies to provide law enforcement services on the Missouri side of the MetroLink system, and St. Clair County later passed a companion bill. The Joint Task Force is waiting on final approval from the Missouri Department of Public Safety to expand Illinois patrols to Missouri stations. A police radio channel for all three law enforcement agencies and Metro Transit’s Public Safety Department is currently in development.

Also in 2017, the East-West Gateway Council of Governments’ Board of Directors approved the use of $3.6 million in federal funding for a comprehensive security audit to examine current security policies on the MetroLink system and implement recommendations for improvements relative to technology, environmental design and human capital deployment. New York-based consulting firm WSP, Inc., was hired to execute the $400,000 MetroLink Security Assessment, which got underway in April 2018 and will wrap up this month. A report will be issued to East-West Gateway Council of Governments in early January 2019. The remaining funding will be used for the implementation of some of the recommendations.

A pilot program, called the MetroLink Access Project, was also developed to help improve fare validation and security presence at three highly utilized MetroLink stations. The project was underwritten by CMT for $45,000, and Metro Transit contributed additional funds. Over a four-week duration this fall, contracted security officers, with the support of local law enforcement, monitored and enforced fare validation for 21 hours each day at the Forest Park-DeBaliviere, North Hanley and Fairview Heights MetroLink stations. Evidence-based findings were shared with those administering the MetroLink Security Assessment.

An exclusion policy, commonly referred to as a “Ride and Abide,” was most recently developed by the TAWG with the intent to promote safety by deterring riders who have committed certain crimes from entering or remaining within Metro Transit property or territory. This policy has been sent Bi-State Development. Next steps will be determined based on its adoption by the agency.

“A lot has been accomplished in the last 19 months,” stated Kimberly Cella, executive director of Citizens for Modern Transit and TAWG member. “Educating the public on these efforts is important to us. We want people to know that the region is invested in this issue – safety is a priority, headway is being made and more will be done.”