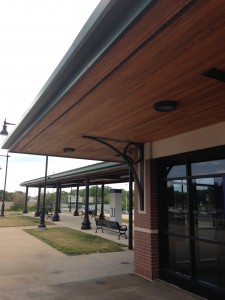 CMT had the rare and interesting opportunity to tour a selection of MetroBus and MetroLink stations with a group of Metro managers to assess the facilities from a user’s perspective. The tour was organized by Ray Friem, Metro’s Chief Operating Officer, for his direct reports. The goal of the tour was to bring all departments that oversee a piece of the users’ experience together to identify the work that needs done at the stations, to help identify the priorities, and to coordinate different departments responsible.

Apparently, the simple act of placing a sign anywhere on the system touches a range of departments, and when one sign isn’t a priority for every one of the departments, the solutions to customer experiences sometimes take longer than expected.

So, in an effort to focus and streamline efforts, they went out and assessed the stations. The departments represented included marketing, planning, security, MetroLink operations, MetroBus operations, Right of Way (signage, bus stops, etc.) and maintenance. They also invited CMT’s long time Metro Monitor volunteer, Steve Siegrest and myself, the grants and program director of Citizens for Modern Transit.

It was interesting to see all the different departments that touched each and every aspect of the Metro experience and how to improve it. Friem commented that Metro’s front door is their stations and the service is their product. When asked to critique the experience, the solutions and observations were insightful, cross- departmental, and could make a big impact.

So now, when a sign is needed, everyone on the team can visualize the need, map out all the departments that need to be in the loop, and move forward rather than getting bogged down in competing priorities.

CMT will look forward to seeing the results of the outing realized and hope for improved user experiences because of it.