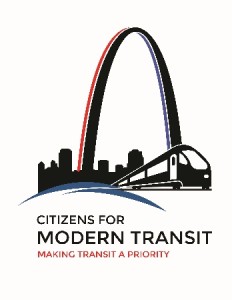 There is heavy, ongoing discussion in the St. Louis region right now regarding light rail expansion. The MetroLink corridor studies under consideration by our elected officials will ultimately help determine which potential routes serve the greatest number of residents and employers, while also providing opportunities for economic investment and development in surrounding areas.

It is crucial that the transit expansion planning initiatives currently being used – which in some cases are more than 20 years old—are updated with more current data relative to potential ridership and financing. If not, there is no way to objectively determine which project should rise to the top of the region’s priority list.  It is also important to note that the East-West Gateway Board of Directors has not yet endorsed any route among those identified in the region’s long-range transportation plan.

Prior to choosing the region’s next potential transit route, Citizens for Modern Transit (CMT), the region’s transit advocacy organization, urges elected officials and all other affected stakeholders to convene for a thorough review and discussion of next steps. We have an opportunity, as a region, to select a route that best meets the needs of today’s and future users, and it may not be what was previously identified in decades-old studies.

It is our hope, and goal, that the next agreed-upon project reflects community needs by providing public transit access and benefits to users who need the service the most – whether they are city or county residents. Public transit expansion also must offer opportunities to enhance both social equity and economic development within the chosen corridor.

CMT was established in 1985 to bring light rail to St. Louis. The first line opened in 1993. Since that time, the region has seen the expansion of light rail to 46 miles and 37 stations.  The CMT Board of Directors adopted criteria for evaluating rail projects in 1996 and those specifics still hold true today. A project must preserve and enhance existing neighborhoods, promote regional unity, help achieve other regional objectives like clean air and improved access to work, reinforce existing public and private investments and improve transportation for the most people in the region.

We are committed to supporting a route that provides benefits to our entire region and has the potential to enhance underutilized areas such as the recently designated “Promise Zone.”  Transit access should unite us as a region, aid in the enhancement and preservation of existing neighborhoods and offer development opportunities to users, residents and employers. St. Louis needs to select and invest in a capital transit project that serves the urban core and county residents, while providing a catalyst to enrich the communities it serves.

CMT will continue to advocate for transit capital infrastructure projects that best serve the region, showcase substantial ridership potential and have strong backing from community members and their local, elected officials.

Clearly, transit expansion requires significant investments and does not happen overnight. We have identified public transit service needs for our community and while determining priority routes is an important next step, it also is incumbent that we find funding sources to meet those needs. So let us be bold, think big and find a way forward together.