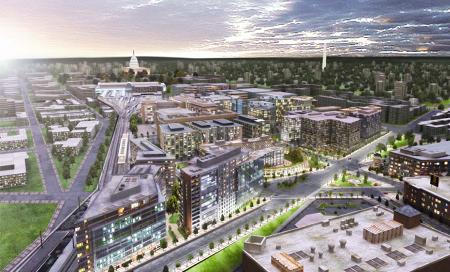 The 2013 Smart Growth America’s Leadership Summit took a walking tour of a new and booming neighborhood in Washington, DC, affectionately called NoMa (North of Massachusetts Avenue).  With a new Metro stop, a new grocery store, and a new CVS, this neighborhood has grown by leaps and bounds and summit participants went to see the success of this poster child neighborhood for Transit Oriented Development.  What used to be an area full of vacant buildings and parking lots, is now bustling part of town with property values going through the roof.

The genesis of all this change was the addition of a Metro stop or ‘development oriented transit’.  Transit is a tried and true impetus for development when done right.  In this instance, public officials worked with the city, the federal government, and local landowners to help share the costs of a new Metro station.  Property owners weren’t enthusiastic originally, but they ultimately contributed $35 million in land toward the $110 million dollar cost.  The city and federal government provided the rest.  Consequently the region has exceeded expectations and the return on investment in the area is significant.

NoMa wouldn’t be a template for all TOD efforts, but it does provide insight for communities seeking to grow a region around their transit system.  The most successful and booming neighborhoods across the country are the ones that accommodate a range of transportation options, are zoned for mixed-use development, and (this is a big one) encourage around-the-clock activity.  This kind of development spurs economic growth, attracts the ever studied Millenial generations, and supports the critical backbone to any urban communities’ future – TRANSIT!

The transformation of this neighborhood is amazing and shows the kind of return investors can experience when they invest in transit.