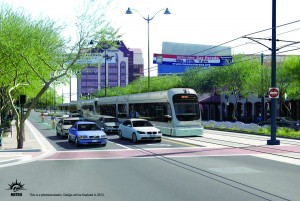 This March, the city of Mesa, Arizona will host a summit for 171 developers, economic development specialists, the Mesa Chamber of Commerce, elected officials, property owners and others in the area in an effort to focus on new urban development projects in the downtown area, around their future Metro light rail line. Their focus will be vacant lots and underdeveloped areas surrounding the new 3.1 mile rail extension. The hope will then be to identify development opportunities, which could be constructed in time to

The Mesa summit will hone in on 10 city and privately-owned properties, but aims to look at the entire area and how to better connect property owners with developers.

“I know people call the street-scape a failure. The problem with some of our development activities is people measure success in months or even a few short years. Real estate development is not a short process. It’s a 5-, 10-, 15-year process.”-Mayor of Mesa, Scott Smith