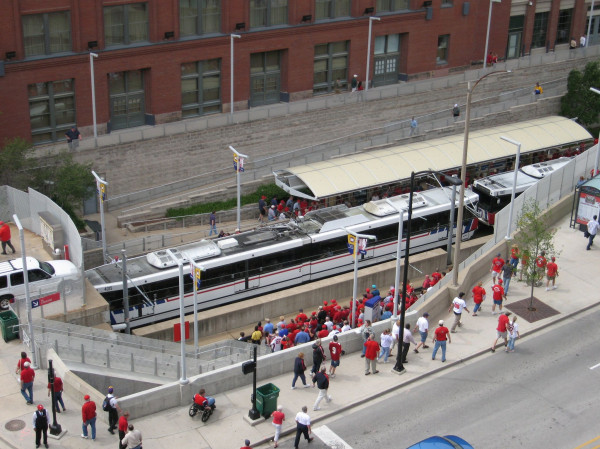 That’s right…Profitable.  Sustainable Cities Collective recently posted an article about Hong Kong’s Mass Transit Rail (MTR) and how the system that connects Hong Kong Island, Kowloon, & New Territories not only 100% pays for itself, but is profitable.  So, what’s the secret behind MTR’s success: Transit Oriented Development (TOD).  The Hong Kong MTR Corporation (MTRC) also acts as a real estate developer.  Each station was with planned adjoining landuse and development potential in mind. Proximity to the station drives up land value and also provides 1000s of potential users for each development.  The MTRC benefits on both ends of this strategy: more riders = more shoppers = higher rent = growing network = more riders.

How does this apply to St. Louis?  Our region certainly isn’t as large as Hong Kong nor is our economy anywhere near as strong, but we can still learn from their successes.  Metro (aka Bi-State Development Agency) was originally incorporated as a development agency with broad powers that enable it to cross local, county, and state boundaries to plan, construct, maintain, own, and operate specific facilities in its effort to enhance the quality of life in the region.

Metro hasn’t done much development in recent years, but is beginning to focus their efforts on TOD.  In April, Metro hired John Langa for the role of Vice President of Economic Development.  Since then Metro has begun inventorying all real estate, developing MetroLink station profiles, and partnering with municipalities to actively market TOD sites.

Metro has also teamed up with Citizens for Modern Transit on an upcoming series of Technical Assistance Panels (TAPs) or studies to be conducted by the Urban Land Institute at 3 MetroLink Stations.  Our first TAP will take place this week at the Belleville Station. Additional TAPs will be announced over the coming months, with ultimate goal creating marketable RFPs/RFQs for each site to attract new transit oriented development.

In our case ,we don’t think TOD will fund MetroLink and MetroBus operations, but we do think it will raise property values, increase ridership, improve the quality of life, and create permanent jobs.