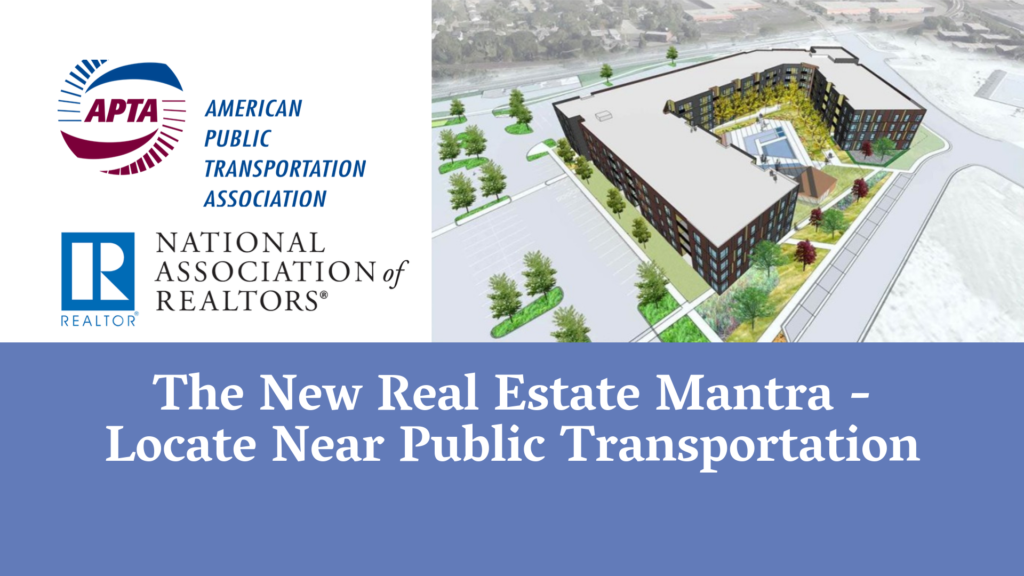 Neighborhoods located within a half-mile of public transit services outperformed those in areas farther from public transit based on a number of factors, according to a report released today by the American Public Transportation Association (APTA) and the National Association of Realtors®. “The Real Estate Mantra – Locate Near Public Transportation” highlighted the critical role public transportation plays in determining real estate values, revealing that commercial and residential real estate market sales thrive when residents have mobility options close by.

Transportation costs in transit-oriented areas are significantly lower than other regions, with an average annual savings of $2,500 to $4,400 for the typical household. One in four households in close proximity to transit do not own a vehicle, according to the study.

“Access to public transportation is an extremely valuable community amenity that increases the functionality and attractiveness of neighborhoods, making nearby communities more desirable places to live, work and raise a family,” said NAR 2019 First Vice President Charlie Oppler, who spoke at Monday’s press conference along with 2019 New York State Association of Realtors® President Moses Seuram. “The results of our report, conducted over multiple years alongside the American Public Transportation Association, should reiterate to policymakers at all levels of government the importance of investing in modern, efficient infrastructure that facilitates growth and helps our nation keep pace in a rapidly evolving world.”

Neighborhoods with high-frequency public transportation are in high demand. While property values and rents have risen, contributing to healthy local economies, the rapidly increasing demand for housing near public transit has resulted in constrained housing supplies.

“As the conversation surrounding housing affordability continues, public transportation agencies are critical allies in working with elected officials and community leaders in the effort to increase housing opportunities and maximize value around stations,” said Skoutelas.