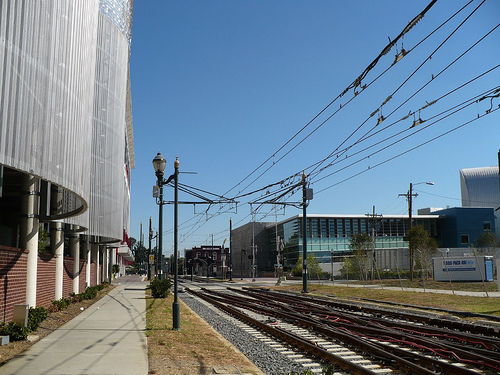 The birth of the modern streetcar and growing support for tramways is a trend emerging across the U.S. and around the world. With streetcar lines typically being less expensive to build than light rail or subway systems, and more attractive to commuters than buses, it seems that the modern streetcar has a bright future. However, one problem that arises with the construction of streetcar lines is the overhead, or catenary, wires that are used for power distribution. Catenary wires are often seen as visually obtrusive, aesthetically displeasing, or unacceptable for historic or heritage neighborhoods, and have even prevented the construction of new lines in some places.

Recently, technological advancements have made catenary-free streetcar systems a possibility. Through the use of alternative power distribution systems, such as batteries, induction systems, or super-capacitators, streetcars can receive the energy needed to operate without being connected to an overhead wire network. However, this new technology is not without its drawbacks. For example, induction systems, which use a third rail for energy, have high initial construction costs and poor reliability in some cases. Super-capacitators can only provide enough energy for limited distances, despite their low cost. Battery and other energy storage systems, on the other hand, have been shown to have low construction and maintenance costs as well as the ability to travel large distances.

As buses and automobiles pursue hybrid technology and the development of electric vehicles, streetcars must do the same to stay competitive in a changing market. Although these recent advancements will bring new life to the demand for streetcar lines, a strong research and development strategy will be essential to ensuring that streetcar technology continues to move forward and that tramways remain an effective and efficient transportation option.