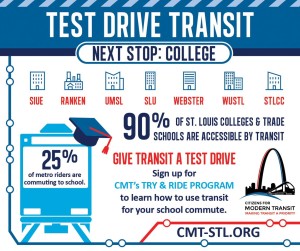 Citizens for Modern Transit  issued a reminder about the availability of its Try & Ride program, which allows area residents to test drive the MetroLink and/or MetroBus for their workday commutes. Targeted at individuals who are new to the public transit system, the popular program provides users with customized route information, helpful tips and free fare for the first month.

The program is open to any Missouri or Illinois residents who don’t already utilize the St. Louis region’s public transportation system for their workday commutes. Upon registering, each program participant receives a packet in the mail with a personalized transit route, a month of complimentary tickets, a journal to capture stories and write down reminders, and a list of tips for using transit. Registration also enrolls them in the Guaranteed Ride Home program, which provides the user with a cab ride home or rental car in the case of an emergency or unexpected schedule change at work. In turn, participants are required to travel to work via MetroLink or MetroBus three to four days per week over a two-month period and take two short surveys along the way so Citizens for Modern Transit can gain user insight and track the progression of the program.

To date, the program has helped more than 4,000 participants familiarize themselves with the local transit system. Kim Cella, executive director of Citizens for Modern Transit, commented not only on the popularity of the program, but its sticking power, stating Program results have proven that the overall transit experience, coupled with the system’s usability, has managed to turn many first-time transit users into regular transit commuters. In fact, 70 percent of our survey respondents report they are continuing to use transit beyond the two-month program commitment. Participants boast cost savings, a less stressful commute and more time to themselves as the biggest benefits of transit utilization.”

There is no fee to participate in the Try & Ride Program. The only out-of-pocket expense is the cost of the second month of the participant’s fare. However, Citizens for Modern Transit reminds area workday commuters that many local businesses and organizations offer transit subsidies that pay for all, or a portion of, the cost to take transit.