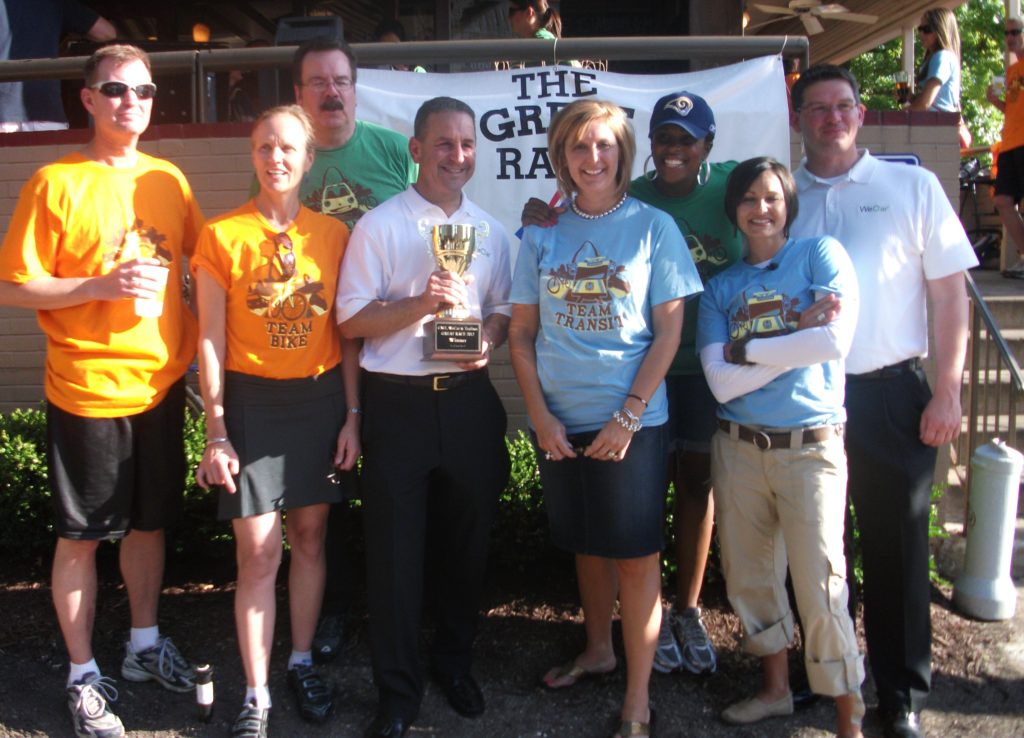 Less than one minute separated first and second place as TEAM CARSHARE crossed the finish line at C.J. Muggs in downtown Clayton, officially earning bragging rights as the winner of the first-ever Great Race event. Hosted by Citizens for Modern Transit (CMT), in partnership with Trailnet and WeCar by Enterprise the May 17 event was designed to play off the CBS television hit, The Amazing Race, placing TEAM TRANSIT, TEAM BIKE and TEAM CARSHARE in a head-to-head battle to see which transportation mode could travel from downtown St. Louis to downtown Clayton the fastest. Missing first place by just 54 seconds, TEAM TRANSIT claimed the second place spot, while TEAM BIKE cruised to the finish line just 10 minutes later, taking third place.

The race started off from Post Office Plaza in downtown St. Louis with a welcome from St. Louis Mayor Francis Slay. At 4:45, Mayor Slay gave the official signal to start the race and the teams departed. Members of TEAM TRANSIT raced on foot to the 8th and Pine MetroLink station where they boarded the 4:51 p.m. train; TEAM CARSHARE ran to pick up its WeCar parked at 10th and Washington; and, with their bikes already in tow, TEAM BIKE began peddling towards the finish line at C.J. Muggs in downtown Clayton. Arriving at the finish line at 5:15 p.m., TEAM CARSHARE was victorious, receiving a trophy from St. Louis County Executive Charlie Dooley.

“As the ambassador for TEAM TRANSIT, I was hoping for a win, but it was awesome to see what a close race it was,” said Kim Cella, executive director of Citizens for Modern Transit. “Our goal in hosting the race was to promote the education and expanded use of the St. Louis Metro area’s transit system and other viable transportation modes, and we definitely did that. All the teams crossed the finish line within 10 minutes of each other, demonstrating that all of these modes can be viable alternatives for the work commute.”

Race supporters dressed in team t-shirts cheered on their favorite teams at both the downtown St. Louis starting line and at the finish line at C.J. Muggs where CMT, Trailnet and WeCar by Enterprise hosted a finish line party from 5 to 6:30 p.m. The event featured remarks from race team representatives, food, refreshments and an appearance from the Y98 prize van and Y98 staffers who were on hand with games and prizes. Those attending the party in were also entered into a raffle for the chance to win a special prize package featuring items specific to the winning transportation mode.

“Many thanks go out to all of our team members for their willingness to take part in this event, and to all the team supporters who came out to cheer on their teams,” said Cella. “TEAM TRANSIT is already looking forward to a rematch next year!”

The Great Race was held as part of CMT’s “Make Your Move on Metro in May” series of events which were proudly supported by the St. Louis Regional Clean Air Partnership.