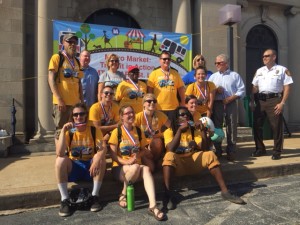 Team Bike took home the gold and bragging rights for the 2017 Great Race.  The date was set, the teams selected and St. Louis media was on board to help promote some of the most viable transportation options offered in the region through this year’s Great Race hosted by CMT and AARP St. Louis on June 14. Team Bike was crowned the winner at the historic Wabash Station on Delmar Blvd. to welcome the Great Race teams at the finish line.

Great Race 2017 Teams were as follows:

Team Metrolink, Team MetroBus, Team CarShare and Team Bike raced, using their respective modes of transportation, to see arrived at the finish line the fastest during the evening rush.  Similar to the CBS television hit “The Amazing Race,” teams were asked to complete a series of challenges along the way. 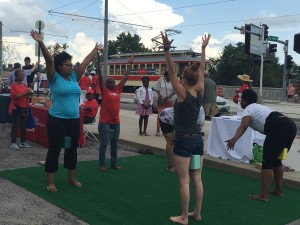 The finish line was part of a pop-up Metro Market at the Historic Wabash Station, located at 6005 Delmar Blvd., just steps away from the Delmar MetroLink station. This event was designed to temporarily transform the vacant site into an active space that connects people to products, services and green spaces, showcasing how areas around transit stations can become focal points for activity. It is free and open to the public. Area residents were encouraged to stop by anytime between 4 and 6:30 p.m.