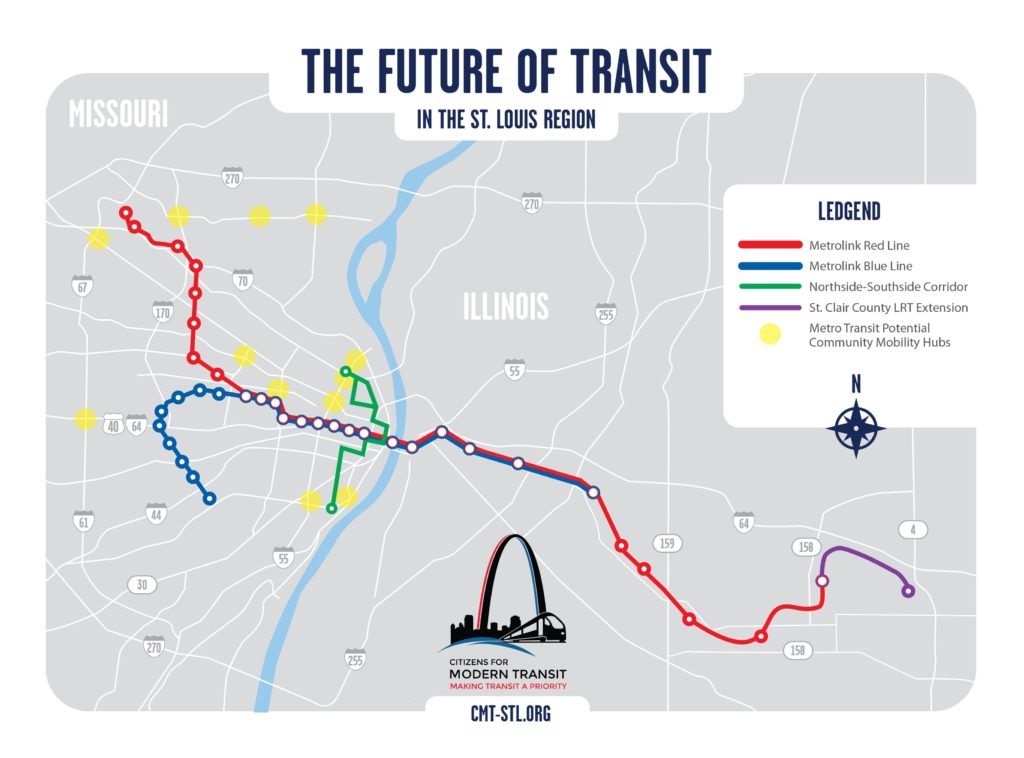 Despite unprecedented challenges presented by the ongoing COVID-19 pandemic, public transit remains an essential component of the St. Louis region’s transportation system. In honor of Rosa Parks Transit Equity Day, which commemorates Parks’ birthday on Feb. 4 and declares that equal access to public transit is a right for all, Citizens for Modern Transit hosted a virtual “Talking Transit” event via Zoom. It highlighted how work continues to positively influence public transit in the bi-state area. Key learnings from presenters included details of the MetroLink expansion in Illinois, the Northside-Southside transit corridor study, current shift in focus to Community Mobility Hubs, funding strategies and more.

As part of Governor Pritzker’s Rebuild Illinois Plan, a $96 million, 5.5-mile light rail expansion project, running from the Shiloh-Scott Transit Center at Scott Air Force Base to MidAmerica St. Louis Airport in Mascoutah, Ill., continues to move forward and was highlighted during the event. The MetroLink extension will provide transportation services to airport passengers and the various tenants on the airport’s property, including the Illinois State Police, Boeing’s St. Clair, Aviation Materials and Technical Support (AVMATS), the Army National Guard, North Bay Produce and others. Patrick Judge, Managing Partner at Gonzalez Companies, who is overseeing the design and construction of the project, shared that an access roadway connecting to Rieder Road to the airport will also be constructed adjacent to the extension. Additionally, if funding allows, a new bike and pedestrian trail will be included as part of the expansive project.

Scott Ogilvie, Transportation Policy Planner, Planning & Urban Design Agency, discussed a Technological Alternative Analysis within the planned Northside-Southside transit corridor in the City of St. Louis. This is the first expenditure from the transit component of the Economic Development Sales Tax authorized in 2017, and work on the project is expected to get underway this spring. Following extensive technical analysis and community outreach, a recommended first phase of Northside-Southside light rail investment was identified where a proposed 8.3-mile light rail segment would operate between Grand Boulevard on the Northside, along 9th and 10th Streets downtown, to Chippewa Street on the Southside. An FTA New Starts Program funding assessment of the Northside-Southside corridor unveiled a capital funding gap ranging between 15.9 – 22.2 percent of the total project costs. While this highly desirable transit corridor would serve the needs of existing residents for enhanced high-frequency, high-amenity transit, eligibility for federal funding is marginal which reinforces the critical need for state, local and private transit funding. The upcoming Alternatives Analysis will serve to answer remaining questions and position the region to make a decision to move transit forward in the Northside-Southside corridor.

Jessica Gershman, Assistant Executive Director, Planning & System Development at Metro Transit then discussed how Metro Transit is moving forward with Community Mobility Hubs. These are designed to enhance major on-street transfer points to improve safety and accessibility and create more welcoming experiences. These hubs would be smaller in scale compared to Transit Centers but larger than a bus stop and feature amenities like seating, shelter, lighting wayfinding/community information and green infrastructure. Other key components of these projects are to include working with neighbors, local leaders and transit users to tailor to each location’s unique needs.

When asked what would be necessary to move any project forward in the St. Louis region, Jim Wild, Executive Director of East-West Gateway Council of Governments said, “The big thing is going to be creativity and cooperation. We need to be able to think outside the box we normally work in. If we sit back and think a little more creatively and don’t just say we can only use bill funds or we can only use New Starts funding, I think that will help us go a long way.” He added that it would be helpful to set some priorities and that entities need to be willing to share with one another more than what has been done in the past. “Transit is just as an important piece of the transportation system as the roads and bridges are. If we start to break down those silos and start blending money a bit more, we’re able to do much more collectively as a region,” said Wild.

“Transit is essential,” added Gershman. “Even amidst this pandemic when people were asked to shelter in place, we still had millions of boardings last year – with 50 percent of our riders needing transit to get where they needed to go. Making sure that we’re focused on goals that enhance equity and access for everybody is something for all of us to coalesce around as none of this gets done without regional support.”

Kevin Scott, General Manager of Field Security at Metro Transit, rounded out the panel discussion with an update on transit security. He discussed how in 2019, MetroLink had 13 million riders. Throughout the course of 2020 during COVID-19, ridership was 6.7 million, which was down 48 percent. Even with 6.7 million riders, they only handled 66 part one offenses and only 424 part two offenses. That’s a total of 490 offenses out of 6.7 million riders, which is far less than 1 percent overall. An impact is being made and they will continue to work every single day to make the system safer minute-by-minute.

CMT hosts quarterly “Talking Transit” events like this one to keep members, elected officials, stakeholders, transit riders and others in the loop on issues and efforts influencing the local transit system. These educational gatherings feature guest speakers and panel discussions addressing a wide range of topics, including transit-oriented development, safety and security, best practices, service changes and more.

You can check out the presentation in its entirety here.