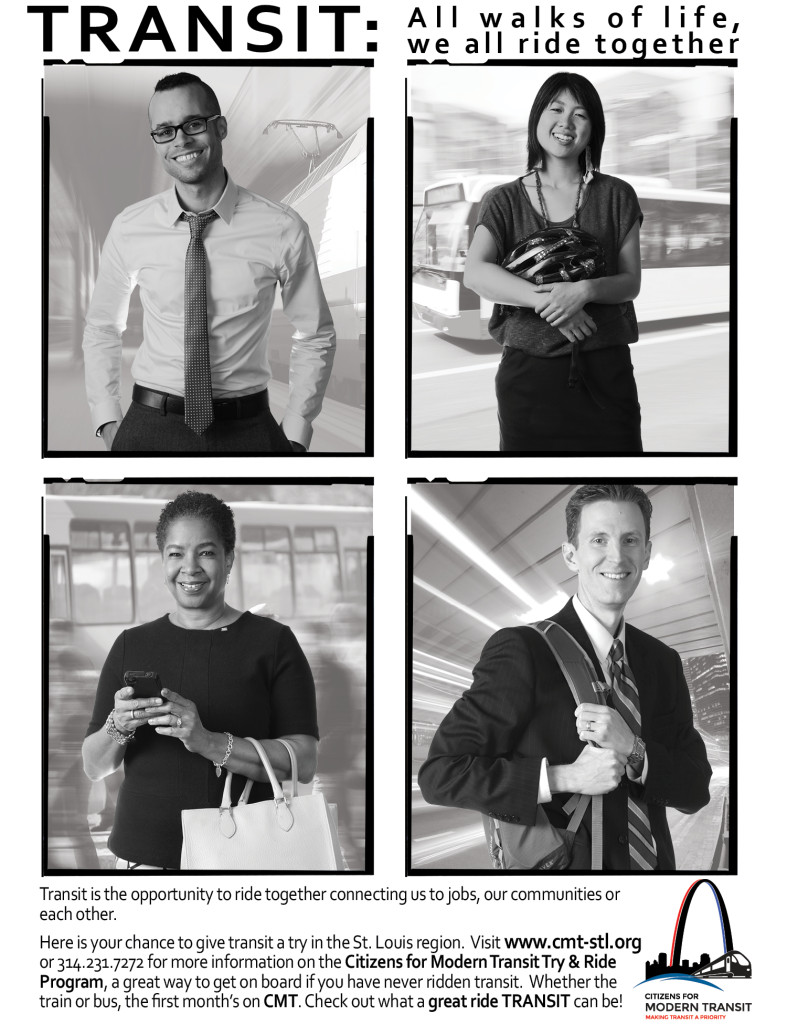 Public transit is the key to bringing our community together. It connects individuals to jobs, communities and each other. Citizens for Modern Transit (CMT) is committed to working with various partners in the St. Louis region to support the community’s existing bus, light rail and Call-A-Ride services, while actively advocating for additional transit options. Discussions are underway at every level in the community on ways to bring St. Louis back together, and transit can play a key role in reconnecting our city.

The average household in St. Louis currently spends almost 20 percent of its budget on transportation, obscuring the fact that this region is an affordable place to live.   Compared to 100 other U.S. cities, St. Louis ranks 68th when it comes to transit access, translating to a lower level of economic mobility for our region. That said, MetroLink provides 17 million rides a year, making it the 8th largest light rail system in the U.S. based on ridership. And, MetroBus has 75 routes and almost 100,000 daily boardings, positioning it as the 30th largest bus system in the nation.  In short, the region has a very successfully utilized system. The need lies in expansion.

There are several potential transit expansion corridors and service innovations which have received extensive review by the metropolitan area’s transportation planning organization.  Unfortunately, the St. Louis region currently lacks funding to move any large-scale capital public transit project forward. Significant and transformative improvements will only be accomplished when the region builds the case for, and develops, long-term, sustainable public transit financing.

St. Louis City and County contribute one percent in sales tax to Metro. While there have been recent setbacks to providing more funding, there is a strong foundation from which to build. As a region, we must explore innovative financing options that could provide potential funding sources to sustain, improve and expand public transit options for riders, communities and businesses. CMT is committed to working to move this effort forward and is commissioning a study to do just that. The organization considers the funding issue to be “job one.”

Nationally, Missouri ranks near the bottom of states in funding of public transit. Last year alone, Metro/Bi-State Development Agency, the largest transit agency in the state with a $250 million plus budget, received only slightly more than $400,000 in state revenue for capital/operating needs. Without an innovative and sufficient long-term funding mechanism, we are missing the opportunity to build stronger, mixed-use neighborhoods and make our region more vital, connected and productive though expanded transit options.

The elements of a long-range transit plan have been identified. We can move forward both incremental projects and a larger vision, but only as funding allows. CMT’s “job one” is to find a funding mechanism which works for this region and to build much needed support to ensure transit connects us to our communities and each other.  Today is the day to make that connection and get on board with transit.