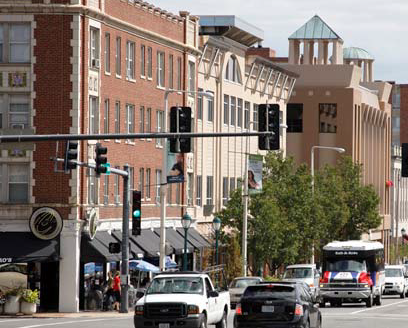 East West Gateway Council of Governments has put forth a study on Transit Oriented Development as it relates to St. Louis MetroLink.  This study outlines that while MetroLink’s 37 stations provide great connections for the region, the stations themselves don’t provide much opportunity to live and work near transit, while using it as the “primary means of mobility.”

“TOD is defined as higher density development designed to provide a pedestrian-oriented environment within walking distance of a transit station, integrating transit as a primary transportation method for the project’s residents or workers.  Typically, TOD projects accommodate a mix of uses, including residential, neighborhood-oriented retail, and commercial uses, at a scale that optimizes public transit investments by increasing ridership.”

There are numerous factors that contribute to limited TOD in the region and in this study such factors highlighted include the slow-growth nature of St. Louis.

In order to reach their conclusions, the St. Louis TOD Market Study followed a list of steps, starting with reviewing prior studies, touring all the stations and surrounding station areas, identifying real estate market conditions, and reviewing findings with the TOD Advisory Committee, Citizens for Modern Transit, ULI District Council and other stakeholders.