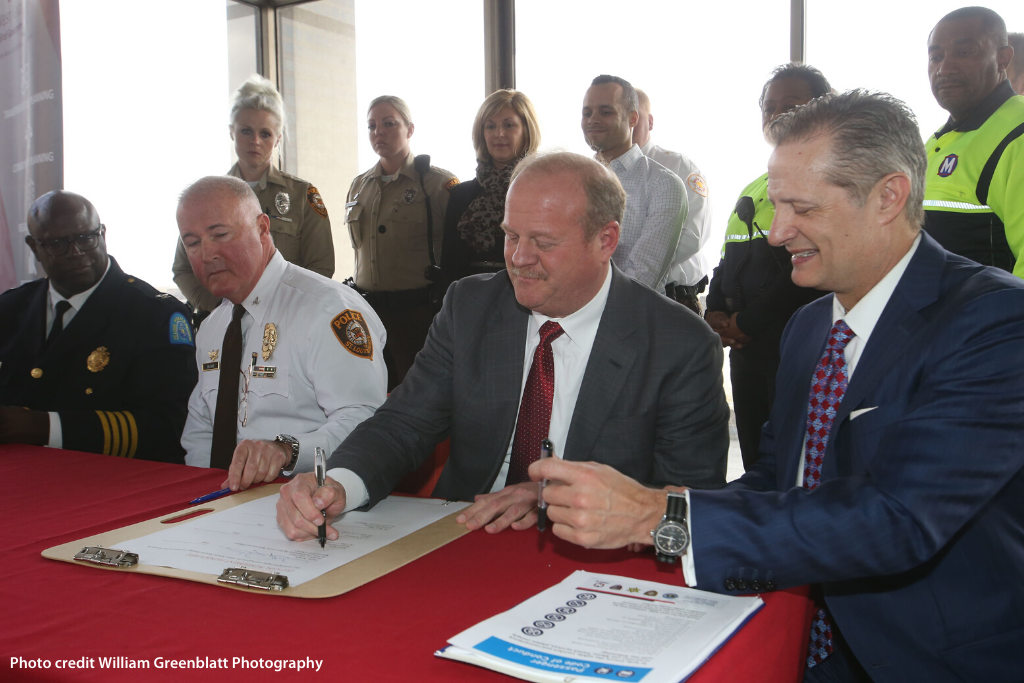 An agreement that outlines a framework for providing a safer, more secure and more comfortable ride for Metro Transit customers was signed today by St. Louis Police Chief John Hayden, St. Louis County Police Chief Jon Belmar, St. Clair County Board Chairman Mark Kern and Bi-State Development President and CEO Taulby Roach at East-West Gateway Council of Governments (EWG),  the planning organization that works to solve regional issues. St. Louis Mayor Lyda Krewson and St. Louis County Executive Sam Page also signed the agreement today but were unable to attend the signing ceremony. The signing follows the memorandum of understanding signed by the individuals in those positions calling for action to improve security on MetroLink in March 2017. Today’s event marked the culmination of two years of EWG assessing MetroLink security, then creating a systemwide security strategy together with area elected officials, Metro Transit, Bi-State Development, which operates Metro, and the three law enforcement departments that help patrol MetroLink – St. Louis County, the City of St. Louis and St. Clair County. “When we assessed Metro Transit, we found that the agency lacked a defined strategic security direction, plan, and program for its 46-mile MetroLink system,” said Jim Wild, Executive Director of East-West Gateway. “We made 99 recommendations for improving security. Then we initiated Phase Two. Thanks to all partners working together during the second phase, we now have a comprehensive security strategy for the entire Metro transit system that will improve both the customer and employee experience.”

The security strategy, which can be read in its entirety at www.ewgateway.org/metro has four major goals:

“There is no single answer to the safety and security issues impacting our regional transit system. Agreement by the City, County and St. Clair County to jointly tackle those issues, in collaboration with Bi-State Development, is an unprecedented show of regional collaboration that will benefit not only transit riders but the entire region. The security plan laid out by East-West Gateway’s consultant WSP for the first time takes a holistic approach to transit security and provides a road map forward to ensure that all riders, whether daily commuters or occasional riders, trust that they will arrive safely at their destinations.  Restoring public confidence is essential for the continued operation and eventual expansion of the transit system,” said Kim Cella, executive director of Citizens for Modern Transit.

“Building strong regional partnerships are the keys to ensuring a safe and secure public transit system,” said Bi-State Development’s Roach. “Our customers will experience a more cohesive, coordinated approach to security that will offer an improved transit experience.”

Assisting Metro Transit in providing customers with a safe and secure ride will be the St. Louis County Police Department, the Metropolitan St. Louis Police Department, and the St. Clair County Sheriff’s Department. All three departments have signed new contracts with Metro Transit. The departments’ police officers and deputies will make up the Transit Police Taskforce but will remain employees of their respective police jurisdictions.

Along with the security strategy is a detailed security plan for Metro Transit to implement with their law enforcement and security partners. The plan contains specific tactics, deployment details, and system vulnerabilities. It is considered Sensitive Security Information under federal law, has a limited distribution, and will not be shared with the public.

To monitor Metro Transit’s progress in implementing the security strategy and plan, EWG has developed a security scorecard that will be updated and published quarterly at www.ewgateway.org/metro through June 2021. At that time, it will be decided whether to continue the quarterly updates.