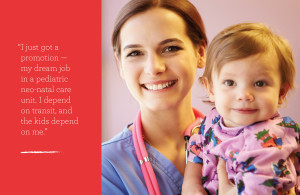 Why is CMT talking livability? Transportation choices and connections go hand in hand with the livability of a region, and we know a safe, reliable and efficient transit system can impact the opportunities for all residents in the St. Louis region.

So why does livability matter? Every city wants to be considered the “most livable,” a title that can help attract new business and investments, boost local economies and real estate, and foster community involvement and pride. It can impact how people relate to each other, the opportunity to form community, and the depth of our social networks. A livable city can impact how much exercise is possible through walking and biking. It can help to reduce crime with more eyes on the street, and tt can directly impact a region’s bottom line.

So how does transit impact livability? Beyond the trip from Point A to Point B, transit investment can impact the bottom line of any region or state.

In 2015, the Ferguson Commission released the Forward through Ferguson report. The report focused primarily on racial inequity, but also recognized  more generally that “A safe, reliable, affordable, and efficient public transportation system can increase access to health care, education, and employment,” and that “Public transit is a key to expanding opportunity for all St. Louisans.”

The two specific calls to action regarding transportation highlighted were:

Right now, Missouri ranks 44th out of 50 states in public transit funding, and spends just 9 cents per capita on public transportation. Our neighbor, Illinois, spends $66.30 per capita. This is an opportunity for the region and the state to do more for transit.

Currently 75 percent of the transit rides in this region are employment related and 20 percent are education related (Bi-State Development). A fundamental shift on the part of the private sector to support transit could go a long way to increasing livability in this region through transit.

A perfect example of the private sector supporting and thus successfully expanding transit is the Cortex Station. Corporate and public sector partners including Cortex, Washington University, BJC Healthcare, Great Rivers Greenway and the St. Louis Development Corporation provided 33.1 percent of the funding ($4.7 million) to make a new light rail station at CORTEX a reality. Their support — along with CMT’s leadership on securing a grant to conduct the required feasibility study — led to Metro’s ability to secure a $10.3 million federal grant to build a new MetroLink station, expand the CWE Station, and create a bike-pedestrian connector.

In addition, the St. Louis Regional Chamber has made transit one of its key priorities in its Regional Agenda for Prosperity.

Transit is this region’s opportunity to create a livable community for the future.  Next steps need to include a transit funding plan, priority projects for this region to coalesce around, and private sector support of transit expansion.