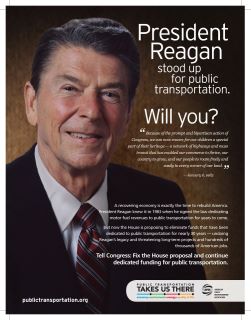 Last night, the Senate came to an agreement that they would begin debating the MAP-21 Transportation Bill and start voting on amendments.   A total of 30 amendments will be considered by the Senate, with no possible way for others to be offered or debated, per the agreement.  More than 200 amendments were originally submitted – many having nothing to do with transportation. The House will be considering its bill again as well following their break next week.

Surface transportation funding is operating on its eighth extension since the last law (SAFETEA-LU) expired in 2009. Barring a passage of any bill in the next three weeks — a ninth extension could follow when the current extension expires on March 31. As it stands currently under SAFETEA-LU, about 2.86 cents of the 18.3 cent gasoline tax goes to an account that funds transit systems across the country. Without passage of a new bill or an extension, this tax would run out.

The key for St. Louis is to let our delegation know the importance of funding for transit.   Transit ridership is up 8% over last year. More and more people are choosing transit as the way to go.  With rising gas prices, we need to ensure that the people have good transportation options.

Remember, Some of us ride transit, but all of us need it! Ronal Reagan believed this during his administration. Let’s not turn back the clock 30 years on public transit funding.  Let your local elected officials know that public transit funding is important to you. Encourage them to to support transit funding at the federal level on your behalf, and thank them for the work they do in supporting public transportation in St. Louis.