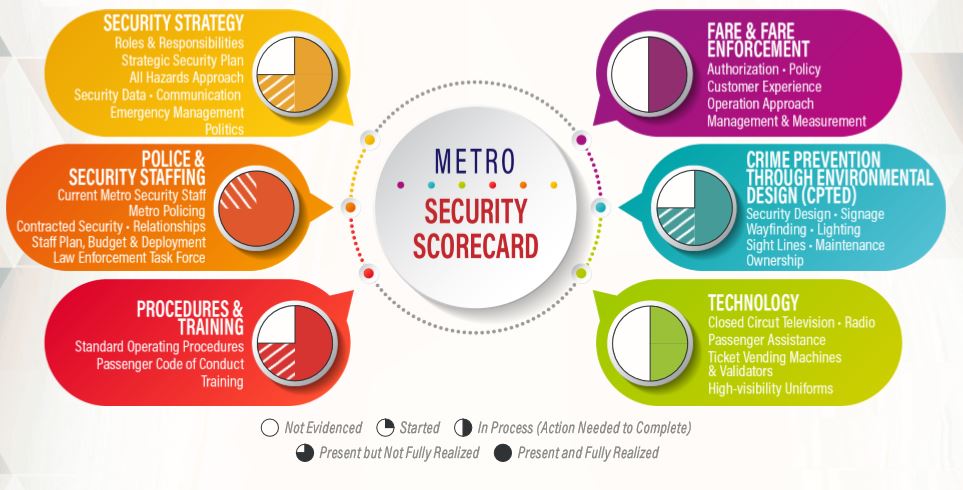 East-West Gateway consultants released the latest Transit Security Report Card this week in St. Louis, and Metro Transit received high marks in four of  the six categories. In February 2019, the MetroLink Security Assessment was completed. This project was led by the East-West Gateway Council of Governments in close partnership with Metro Transit and Bi-State Development leadership and staff in response to a steady rise in crime and perception of crime on the MetroLink system. The final report yielded 99 recommendations spanning the six categories shown below.

A second phase of the project, The Metro Security Strategy, began in May 2019. Phase 2 outlined a program for implementing the non-infrastructure recommendations through the development of a comprehensive security strategy for the Metro Transit system. As a part of Phase II of the study, a security report card was created to track progress on the 99 recommendations and provide metrics around the safety programThe original scorecard was published in September, 2019, and quarterly updates will be completed by EWG moving forward.

The most recent update showed significant progress in strategy, staffing procedures and training including

Items highlighted that still need to be addressed included fare and fare enforcement and  technology updates like camera system. In addition, there is still work underway to secure one radio communication channel. The next security report card will be available in September, 2020.

Downloads of the full scorecards are available below:

The recommendations document and other supporting documents from Phase 1 can be viewed below or visit the East-West Gateway Council of Governments website for more details.

This includes other documents from Phase I of the study.