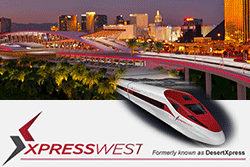 A Nevada-based group is looking to create an extension to the California bullet train that would stretch the Golden State’s rail network all the way to Las Vegas. The current $68 billion California-only line is overseen by the government’s High Speed Rail Authority, but the 200-mile Vegas line, XpressWest, would be supported by a group of private investors led by casino developer Tony Marnell.

XpressWest would tentatively be slated for completion in 2029, just north of Los Angeles. The hope is to provide trips from L.A. to Vegas in about an hour and a half and for as cheap as $45 dollars per ticket. XpressWest would be more than just a mode of travel, extending the Las Vegas experience, including concepts such as hotel check-in services, dinner and show reservations, and multiple entertainment options on board the train.

The project is looking to secure approval on an approximately $5 billion loan from the federal government, which if granted would be the largest loan of its type ever provided by the federal government for a rail project. If XpressWest does get its federal loan and then fails, the government would likely take over the system’s operation. Earlier this month, California Governor Jerry Brown signed a bill, approving state legislature to begin selling $4.5 billion in bonds to pay for the start of the train’s construction

It is estimated that XpressWest will create 80,000 new jobs, although only a fraction would be permanent. Officials also anticipate the train would divert 2 million car trips from Interstate 15 a year, reduce emissions on Interstate 15 by 40 percent, and save the equivalent of 8.5 million gallons of gasoline.