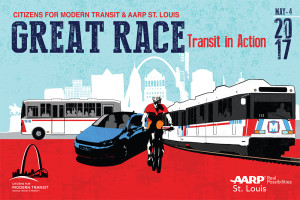 Citizens for Modern Transit and AARP St. Louis  announced plans for a pop-up Metro Market to be held on Thursday, May 4 from 4:00 to 6:30 p.m. at the Historic Wabash Station in The Loop located at 6005 Delmar Blvd. The event is designed to temporarily transform the vacant site into an active space that connects people to products, services and green spaces, showcasing how areas around transit stations can become focal points for activity. This event is free and community members of all ages are encouraged to attend.

“Last year, CMT, AARP and community stakeholders completed walk audits of three key MetroLink stations and identified short and long-term recommendations for improving functionality and making them safer and more vibrant destinations,” commented Kimberly Cella, executive director of Citizens for Modern Transit. “An action plan is being executed and a series of improvements have been completed and others are currently underway. Our next step is the May 4th pop-up event, which will give stakeholders, riders and the general public a peek at what is possible.”

“We are bringing the concept of space activation to life so people of all ages are better able to visualize the potential that exists to create safer, more livable communities around transit stations,” added Sheila Holm, community outreach director for AARP St. Louis. “We are also hoping it will prompt those in attendance to share their thoughts on the experience and the types of enhancements they would like to see.”

The Metro Market is also set to serve as the finish line for the 2017 Great Race: Transit in Action. This competition plays off the CBS television hit “The Amazing Race” to raise awareness about the many viable transportation options available in our region. Team Metrolink, Team MetroBus, Team CarShare and Team Bike will race, using their respective modes of transportation and completing a series of challenges along the way, to see who gets from their specified starting points to the Historic Wabash Station the fastest during the evening rush. Each team is comprised of local media personalities and representatives who have a vested interest in the transportation options represented.

Search for the event on Facebook and other social channels using #TransitInAction.