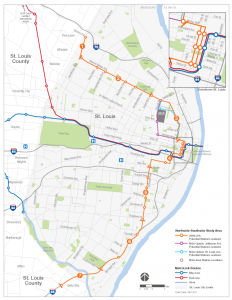 The consulting team led by AECOM  continue to move forward on the Northside Southside MetroLink Study. More than 229 people cam out in January to see the findings and provide input.

Attendees heard the following at the open houses in January:

The final project recommendations will be presented to the public late this spring for final review.

What you can do now: