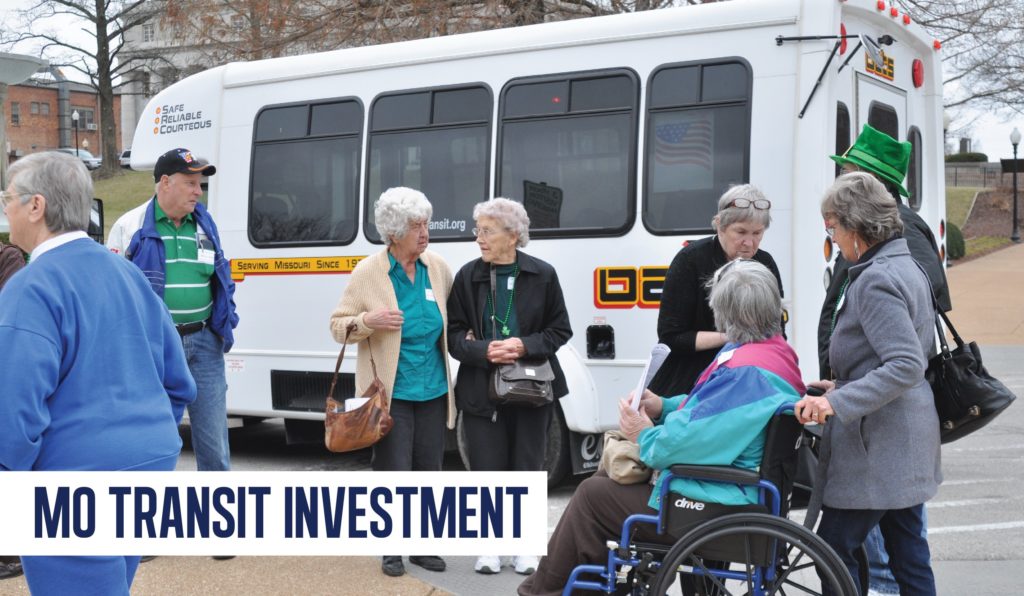 The State of Transit Funding Commentary

OATS is one of the largest and oldest transit systems of its kind in the nation. It has been serving Missouri since 1971 and currently provides reliable transportation service in 87 counties, with the help of 636 drivers and a fleet of over 800 vehicles. Last year, OATS buses travelled 15 million miles in the state providing over 1.5 million one-way trips. People rely on OATS bus service to get to work, doctors, grocery stores, pharmacies, senior centers, sheltered workshops and anywhere else they need to go. However. the lack of financial support from that state of Missouri has a significant impact on OATS ability to serve them – and, weather federal government shutdowns.

Transit investment must become a priority in Missouri. Transit systems across the nation receive approximately 40 percent of their annual operating budgets from their respective states. This is not the case in Missouri. For more than a decade, the state legislature has continued to slash funding to an all-time low, with $1.7 million split among 34 transit providers last year. Many local transit providers now get less than one percent of their annual operating budgets from the state.

This void means OATS, and other Missouri transit providers, must rely more heavily on federal dollars, while seeking creative means to secure funding resources. The federal government shutdown has forced OATS to cut service by 15 percent, and further cuts will have to be made if the shutdown continues.

Despite the here and now with the federal government, persistent lack of state funding is taking its toll on transit providers. This issue must be addressed. According to the Missouri Public Transit Association, service cuts and fare hikes are being made in various communities statewide. This means service in some counties in no longer available at the same level of frequency. Those living in more rural communities are only able to gain access to one or two rips a month. This is not enough for the people who are dependent on transit to gain access to doctors and groceries. And, it certainly doesn’t help someone who might need daily service to get to work.

I’ve worked to further the delivery of transportation services for more than three decades, and if there is one thing I’ve learned over the years, it is that there is no single funding source with enough money to ensure OATS can serve all the people in need of its services. It is not being suggested that the state figure out a way to fully fund transit. What’s needed is a bigger, more reliable partnership.

It takes multiple sources to keep buses running – local, state and federal funding, fare revenue and support from riders and other individuals, businesses and organizations. It is essential to the ridership and to the vitality of the state, as public transit helps to stimulate economic development, attracts and retains business, establishes healthier communities, connects individuals to job opportunities, furthers equality and builds sustainable communities.

The need for public transit in rural areas was identified way back in 1971 and Missouri led the way in developing the solution. I ask state legislatures to rally behind this cause and keep transit moving forward.

Dorothy Yeager is the executive Director of OATS, Inc., and executive committee member of the Missouri Public Transit Association.