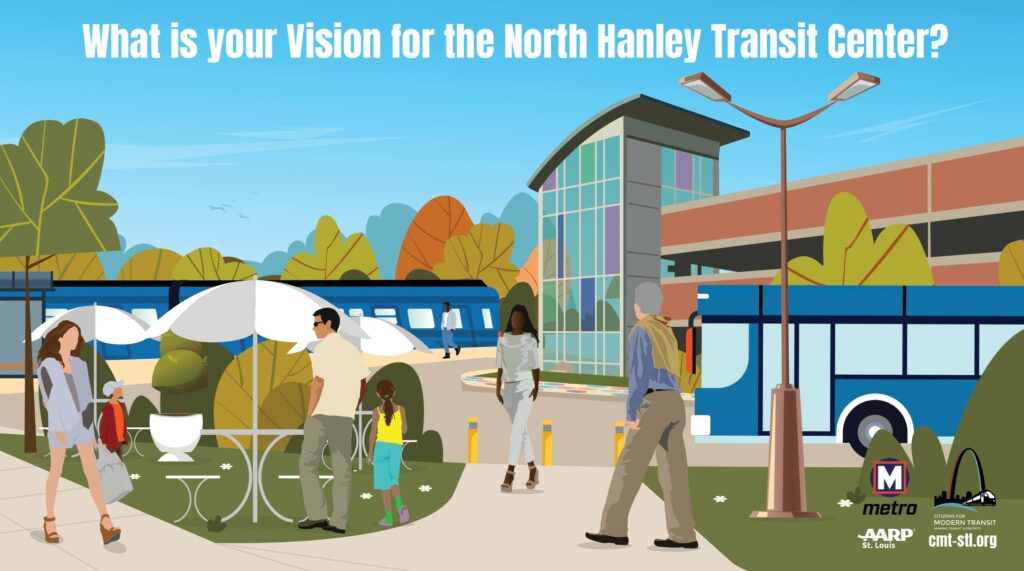 On the heels of the launch of the “Transit Stop Transformation” Project at the Belleville Transit Center in Illinois, Citizens for Modern Transit (CMT) and AARP in St. Louis today announced that the North Hanley Transit Center will be the location of its next transformation project in partnership with Bi-State Development/Metro Transit. Team Better Block has been selected as the planning and design consultant.

In the coming months, CMT and AARP in St. Louis will be working to establish both public and private community partners. Transit riders, area residents, elected officials and stakeholders will then have the opportunity to provide insight on what they would like to see at the site via onsite community events, surveys and a walking focus group.

“The North Hanley Transit Center will be the fourth transit stop to be transformed in the St. Louis region, and the first stop in unincorporated St. Louis County,” commented Kimberly Cella, executive director of Citizens for Modern Transit. “The first to be transformed was a Maplewood MetroBus Stop in spring 2020, followed by the Emerson Transit Center in late-summer 2021. Belleville is currently in the works. Each of these projects are helping to create engaging, energized spaces that promote community and transit use.”

This station has been in focus for decades with regards to possible development for North County including workforce housing and more, however, nothing has come to fruition. Overtime, this project could be the catalyst to create a transit village at North Hanley, complete with mixed-use developments, public amenities, and an inviting sense of place.  This project could challenge systemic inequities in an area of North St. Louis County which has seen less of the investment around transit as seen in more affluent socioeconomic markets.

“Transit Stop Transformation” Projects are designed to showcase a deep understanding of and commitment to equitable development around transit, the impact and possibility of play, the ability for creative interventions to produce long-term impact in neighborhoods accessible for residents eight to 80 years of age, and the need for collaboration to succeed. As part of the collaborative approach, all projects include stakeholder engagement to build consensus and policies to move permanent development forward resulting in transformations that contribute to improving safety and security, building ridership on the system and increasing activity around transit.

Onsite engagement events are already scheduled for the dates and times below: