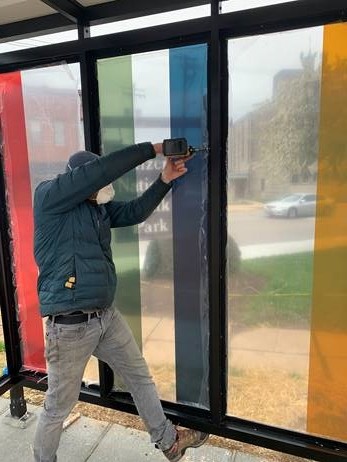 New, improved shelters have arrived at the Maplewood MetroBus Stop at the corner of Manchester and Marshall.   The enhanced shelter will now include two new smaller shelters, made from a former shelter, that include art and activity.  One shelter will have a bench and one will have a gli

der when complete for seating. In addition, an element of art and lighting will be added.    The Maplewood Transit Stop Transformation project is

a joint initiative between CMT, AARP in St. Louis, KaBOOM!, the City of Maplewood, and Citizens National Bank to convert the space surrounding the Maplewood MetroBus stop into a fun, artistic space that encourages active play, cultivates community and increases transit use. The design for the overall project was led by BlackArc Design with input from residents. Refurbished shelters are being installed this week with beautiful pops of color.

“We are so excited to see the shelter being reinstalled,” said Kimberly Cella, executive director of Citizens for Modern Transit. “This refurbished bus stop designed specifically for the Maplewood area will truly transform this transit stop and help to beautify this gorgeous community.”

The Maplewood Transit Stop Transformation project serves as an extension to Citizens for Modern Transit (CMT) and AARP in St. Louis’ ongoing efforts to raise awareness about “placemaking” around transit. This is a concept that transforms places people simply pass through en route to their next destination – like MetroLink and MetroBus stations – into active, engaging corridors that connect individuals and neighborhoods by offering access to products, services, and green spaces.