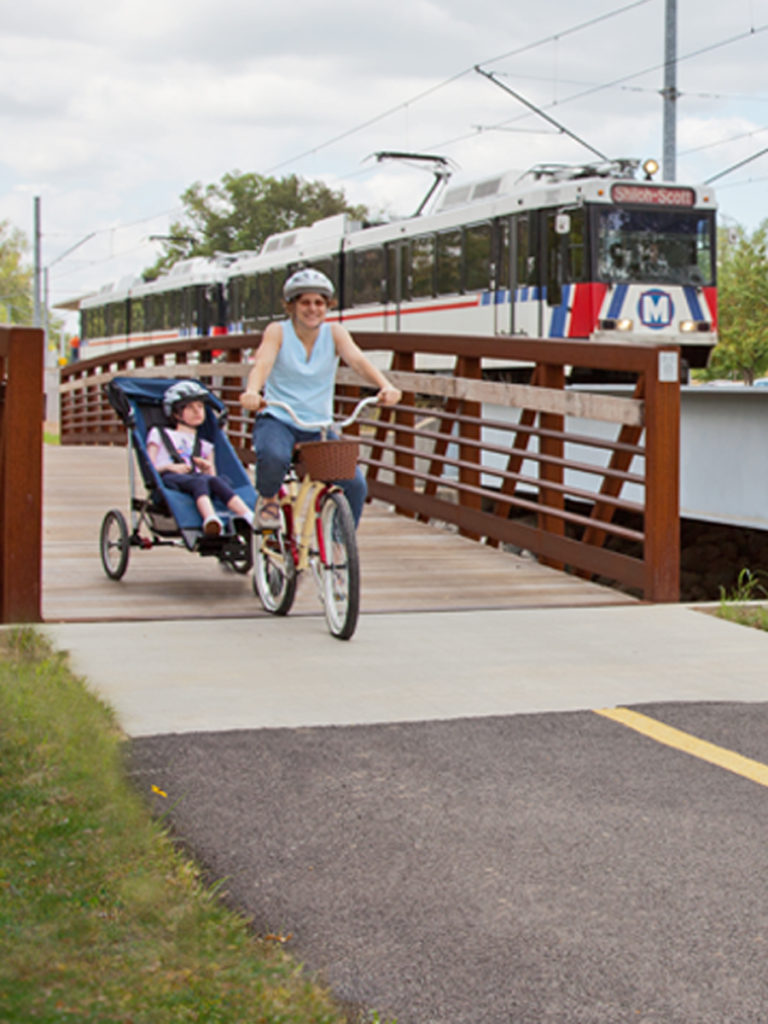 Attention St. Clair County area cyclists, walkers and joggers, the new 2.2 mile MetroBikeLink Trail extension located between the Swansea MetroLink Station and the Memorial Hospital Station is set to open in mid-October, helping to further the evolving multi-model transportation system throughout Southwestern Illinois. Join the St. Clair County Transit District on Thursday, Oct. 18 at 9:30 a.m. at the Swansea MetroLink Station for a ribbon cutting ceremony to mark the official opening of this new segment.

The bike and walking trail will connect from the Memorial Hospital MetroLink Station to Belleville’s North End Park, totaling 6.9 miles of completed trails.  This new segment includes a grade-separated bridge over Fullerton Road and drinking fountains at both the Swansea and Memorial Hospital stations.  The project came in at a total cost of $3.3 million, more than half of which was funded by the St. Clair County Transit District. Another thirty-six percent came from the Federal Transit Administration, while the remaining funds were contributed by the Metro East Park and Recreation District.

“This project demonstrates just how effective our multi-modal system is in St. Clair County,” said St. Clair County Board Chairman Mark Kern.   “We are seeing a diverse group using the trail system from recreational walkers in the early morning hours; to bikers and walkers during the morning commute; to families, students and individuals throughout the day; and the return of our commuting population in the evening. By adding this 2.2 mile segment, we are further opening the system to our residents and visitors alike. It is a great way to see a slice of life in Illinois along the trail system. Congratulations go to the St. Clair County Transit District and its partners on delivering a value-added piece of public infrastructure for this region.”

St. Clair County Transit District will celebrate the completion of the project with a ribbon cutting at the Swansea MetroLink Station’s Park-Ride Lot.  Those in attendance will hear from Mark Kern, St. Clair County Board Chair; John Nations, Metro President & CEO; and Mike Buehlhorn, Executive Director of the Metro East Park and Recreation District, before being invited to explore the new trail. St. Clair County representatives will also be on hand to demonstrate how to use the MetroBus bicycle racks at the station, helping area commuters understand how they can stretch their trips farther by linking biking with the use of MetroBus or MetroLink. Cyclists can take their bikes on MetroLink for no extra charge. They just need to stand at the back of the MetroLink train cars to load their  bicycles

“Our goal is to create a complete trail system in St. Clair County and this new segment is one big step in the right direction,” said Bill Grogan, Managing Director of the St. Clair County Transit District “We have already seen spurs, and connections to neighborhoods off of the current trail, including a new one at Southwestern Illinois College to the adjacent neighborhoods.  It is our hope that this trail system, with the ability to hop on MetroLink or MetroBus, will link our system to the Missouri side of the river.”.