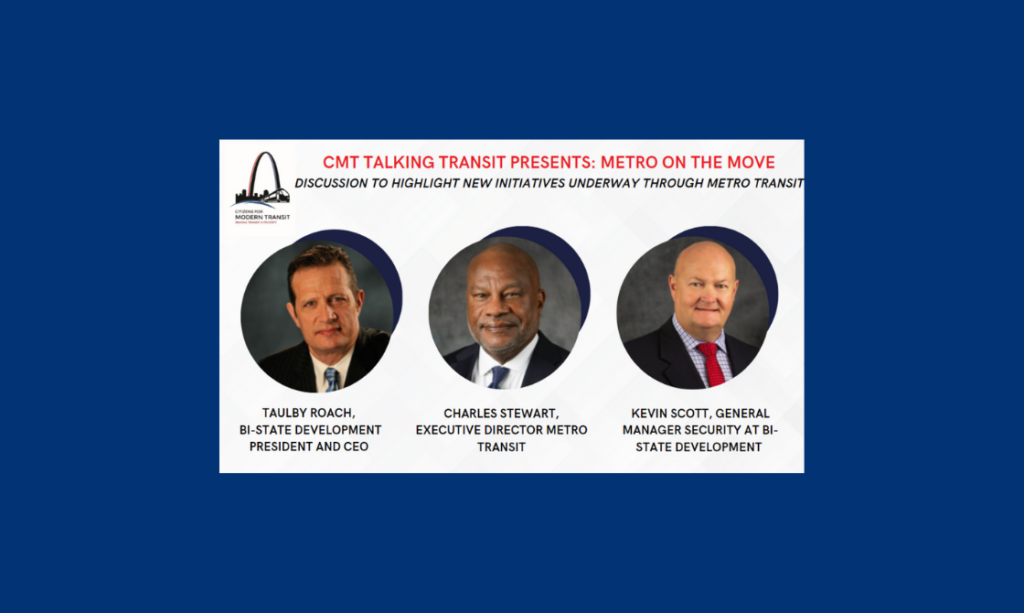 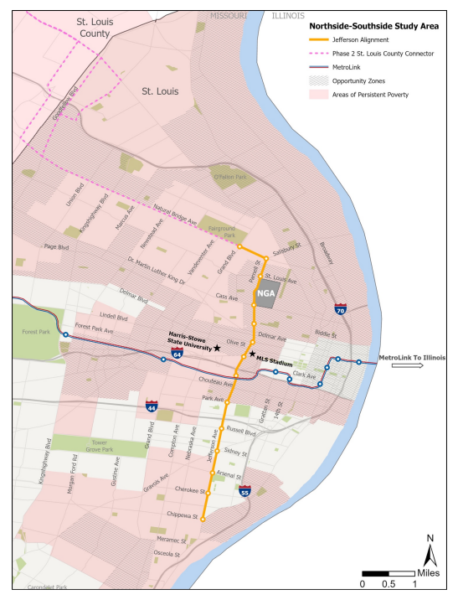 Those in attendance learned about the latest plans associated with the Northside-Southside MetroLink Study with St. Louis City and St. Louis County, Metro Transit’s new Secure Platform Plan and the service profile of the organization moving forward. The panel discussion featured Taulby Roach, President and CEO of Bi-State Development which operates Metro Transit for the region; Kevin Scott, General Manager Security at Bi-State Development and Project Leader for the Secure Platform Plan; and Charles Stewart, Executive Director of Metro Transit. It was moderated by Kimberly Cella, Executive Director of Citizens for Modern Transit.

The presentation got underway with Roach providing an overview of the updated Northside-Southside MetroLink Study, which has made significant progress over the last several months to examine an affordable and doable plan backed by political will and the needed financing to get it done quickly and realistically. This proposed simplified alignment under study is straightforward, cost considerate and accomplishes goals to address historical inequities, move into neighborhoods of divestment, leverage comparable investments like NGA and provide direct access to the new Major League Soccer Stadium and all that is being invested in on Jefferson Avenue at Market Street. The St. Louis City portion of the extension would go from Natural Bridge to the north – down Jefferson Avenue – all the way to Chippewa Street to the south. It would include a transfer station providing critical access to downtown St. Louis and to existing Red and Blue MetroLink lines. The cost is estimated at $600 to $800 million, which would be funded by federal dollars and a local match generated through sales tax via Prop 1, which passed in 2017. The updated Northside-Southside MetroLink Study results are expected to be complete in late August or early September this year, at which time they will be presented to East-West Gateway Council of Governments for final endorsement.

“Transportation is the fabric of the region and the fabric of the future of the greater St. Louis area,” said Roach. “We have an alignment of political interests to move transit forward. We’ve fused the teams of St. Louis City and St. Louis County to look at an expansion project that makes sense. We have a great opportunity to move St. Louis forward.”

Scott then presented on the new $52 million Secure Platform Plan that has broad support from public and private sector partners. The initiative will install new fare gates and perimeter fencing at all 38 MetroLink stations, including 68 entrance gates and 81 exit gates and safety infrastructure around the tracks, stations and platforms; a fare purchasing system with vending machines and card readers that integrate with mobile devices; and an update of the transit system’s closed-circuit camera program with a real-time camera system. The Secure Platform Plan has received support and endorsement from each primary elected official in Bi-State Development’s funding jurisdictions – St. Louis County and St. Louis City in Missouri and St. Clair County in Illinois – as well as the ​Bi-State Development Board of Commissioners. It has unprecedented financial support from the private sector. The sources of the $52 million in funding includes $17.25 million from the Bi-State Development capital funds budget and the American Recovery Plan, $12 million Bond refinancing proceeds dedicated to security, $12 million Illinois allocation from federal stimulus and $10.75 million private sector funding, which is rare and underscores the importance of this project and the essentialness of public transit to the future of the region. The project is expected to take 24 to 30 months to complete. Proposals have been received for design services and are currently under internal review. In the coming weeks negations will get underway with the selected firm with the goal of presenting the proposed agreement to the Bi-State Development Board of Commissioner on August 11, 2022, for approval and the intent to proceed.

Stewart rounded up the morning discussing Metro Transit’s ever-evolving efforts to meet the needs of riders amid operator shortages and supply chain issues. Metro Transit is comprised of MetroLink light rail, 59 MetroBus routes and the Metro Call-A-Ride paratransit service. Ridership has been significantly impacted by the pandemic and is slowly making a comeback. Demand for Metro Call-A-Ride service is sky high with 47,000 requests per month with as many as 8,000 denials due to the lack of manpower and vehicle availability. Metro Transit is down eight operators for MetroLink, 137 on MetroBus and 52 on Metro Call-A-Ride. It is also short 62 mechanics. In response, it has adjusted services, added micro-transit services like Via Metro STL and enhanced its recruiting and training efforts to help attract and maintain operators and mechanics. Metro Transit is also working on light rail vehicle replacement that will incorporate updated video systems and next generation Wi-Fi capabilities and the bus fleet will be updated with safety and customer enhancements. There is a target for a 30 percent fleet capacity featuring the latest electric bus vehicles and improved charging infrastructure. Some MetroLink stations will be completely renovated and other stations will get upgraded lighting and customer amenities like Wi-Fi. There will be drastic change in the look of MetroLink in the future.

Scott concluded the event by stating, “We have the chance to completely reinvent the system. We have one shot at doing it. It has to be done right. It will profoundly change the light rail system for decades to come.”