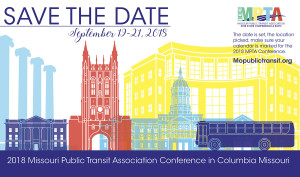 The City of Columbia, which has made huge strides as the first city in the state of Missouri to move towards fleet of electric buses to reduce expenses, will serve as the backdrop for the Missouri Public Transit Association’s 2018 State Conference and Expo this fall as concern for lack of federal and state transit funding continues to grow. While the City of Columbia’s electric bus fleet technology produced a 70 percent decrease in preventative maintenance costs over the last several years, these and other new and innovative ways used to reduce expenses have not been enough to offset the lack of federal and state funding needed to prevent the largest bus cuts made in the agency’s history. As a result, hundreds of transit professionals, stakeholders, elected officials and interested citizens will gather at the Holiday Inn Executive Center, from Sept. 19 to 21, to discuss opportunities to shape policy, overcome funding obstacles and create new ideas for furthering transit access across Missouri. Those interested can register at www.mopublictransit.org.

“Missouri’s public transit providers deliver more than 62 million rides across the state each year, and there is transit service in every county in this state,” said Kimberly Cella, executive director of Missouri Public Transit Association and Citizens for Modern Transit. “Transit is the sole means by which many Missourians can get to work, school and doctor appointments, as well as gain access to goods, services and entertainment. Without it, some simply could not get by. Transit also creates jobs, stimulates local economies, attracts investment and contributes to the financial well-being of the state. This event will bring together transit influencers with the intent of exploring ways to further transit access.”

The three-day conference will feature nationally recognized keynote speakers, a host of workshops and breakout sessions, an expo, networking events and more. Those in attendance will hear from Charlotte DiBartolomeo, M.A.C.T., the founder and CEO of Red Kite Project, a resiliency building firm working with the transit industry to mitigate the impact of burnout, as she addresses how to put a face on transit operations and transit driver burnout. Scott Bogren, the executive director of the Community Transportation Association of America (CTAA), will discuss how to effectively communicate with elected officials at all levels, emphasizing techniques, goal setting and outcome-based advocacy. He will also share a national perspective on where transit is headed in terms of investment, private-sector partnerships, innovative technologies, and much more. Chris Keefover, a field intelligencer officer for the Transportation Security Administration, will also take the stage to inform attendees about homeland security and transit.

For more information or to register, visit www.mopublictransit.org.