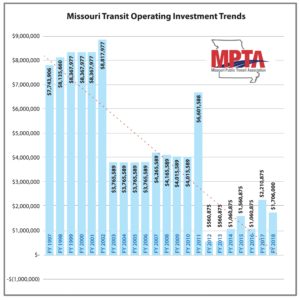 In 2017, the General Assembly adopted HCR 47, which established the 21st Century Missouri Transportation System Task Force, a 23-member bipartisan panel comprised of participants from the House of Representatives, the Senate, the Executive Branch, and the private sector. The Task Force was directed to evaluate and make recommendations regarding Missouri’s transportation system and respective funding of that system.

The Task Force released its report on January 2, 2018 with a list of recommendations including calling for an increase in state gas tax revenues to deliver economic growth.  The Task Force is recommending a 10 cent hike in the gas tax to 27 cents a gallon. It also wants to raise the diesel fuel tax to 29 cents a gallon. Both the gas and diesel taxes have been set at 17 cents for nearly two decades.

According to the report, the Task Force is not recommending any additional taxation of Missouri citizens to pay for the dedicated stream of funding.  One option suggested in the report for securing multi-modal revenue would be to revise Missouri’s Timely Filing Discount on retail sales and withholding taxes. Missouri allows retailers to retain two percent of the sales and use taxes they collect from customers if they remit those taxes to the state in a timely manner. This vendor discount is uncapped and is the second-most generous in the country, and cost Missourians about $115 million in 2016.  A discount at a lesser percent or implementation of a cap would provide revenue savings—which could then be directed to this dedicated funding stream for multi-modal transportation. In addition, the Task Force recommends that any potential savings should be statutorily designated to go into this fund.

The Task Force met 10 times throughout the state from June through December 2017 with opportunity for public comment at every meeting.  In all, more than 100 individuals testified on a variety of transportation issues. According to State Rep. Kevin Corlew, sponsor of HCR 47, the proposed fuel tax hike would provide an additional $430 million a year for roads and bridges. The proposed fuel tax hike would have to be passed by both the legislature and Missouri voters.

The plan faces challenges in the legislature, but is definitely on the right track with transit.