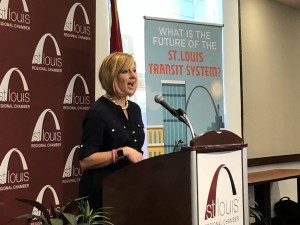 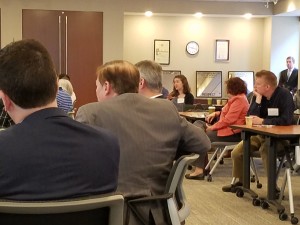 Citizens for Modern Transit & the St. Louis Regional Chamber hosted an update on the Metro Reimagined Study underway looking at a redesign of the St. Louis transit system to meet the needs of the changing community on April 27 for CMT members, stakeholders and interested citizens.

Metro recently completed their analysis of the current MetroBus system as part of the 15 month study.  The Metro ReImagined project, which kicked off in April 2017, is a 15 month study that not only looks at where people travel in the region, but why they travel and how they want to get there. The study will also evaluate the potential of new technology and innovative transit concepts – from new vehicles to new service options.

Prior to the study update, CMT Executive Director Kim Cella outlined some of the security updates that have occurred on the system since the signing of the Memorandum of Understanding in May 2017 by the regionally elected officials and Bi-State to improve safety and restore public confidence in the system.

Cella highlighted the following accomplished since May 2017 or in the works:

Since that last public update, a lot more has been accomplished or is in the works.

“Transit safety and security is a priority for many in St.  Louis. There is no one tool, but many stakeholders and groups are spending significant time and resources to help ensure a safe, secure ride for all users – whether they ride every day or just to an occasional Cardinals game in Downtown STL. W Each of these steps is a step in the right direction, but we’re still short of the finish line. As we move forward, we are asking elected officials to hold their individual law enforcement agencies and Bi-State its employees accountable to the recommendations outlined in the MOU. This commitment requires complete cooperation to help ensure the safety of riders,” said Cella.

Following the security update, Jessica Gershman, Manager of Long Range Planning for Metro, presented the findings on the proposed plan based on a  year’s worth of work.

The proposed plan also focuses on customer service and brand perception.  Metro plans to use South West Airlines as a brand example when considering making communications and customer service improvements.

According to Gershman, one goal with this plan is to reverse the decline in ridership with these improvements to the efficiency and frequency of the system.  An emphasis in customer service, and utilizing new technologies such as the smart card, are also in the works to bring transit riders back.

For more information or to weigh in, http://www.metrostlouis.org/reimagined/